Enlarge /. A lot of literature.

Look, we're admittedly biased at Ars Orbital headquarters. Whether it's the best or the worst time, we routinely find comfort in a good book. COVID-19 has changed a lot in our daily lives, including some of our entertainment habits related to gaming or streaming TV and film. But when it comes to valuable reading time between work and a busy private life, we are always drawn to the stories that concern us – however dark some may be.

This year's employee recommendation / To Read Read list contains some recent publications, many old classics and many alternative realities / science fiction. Ars & # 39; book taste remains nothing if not on the brand, which means that we may never get through one without mentioning Douglas Adams. Here's everything, Hitchhiker’s guides and others we fled to.

Sci-fi fans who love to inspire characters and stories that are more human interaction than technical tricks will appreciate John Scalzi's latest trilogy The Interdependency. The third book, which was only published last week, connects things properly – a premiere for Scalzi. Interdependence is an old-school cross-galaxy empire with a twist – habitable planets are almost impossible to find, and to stem the war, interdependence was designed so that no system can survive without trading with the others.

This arrangement is fine until systems are unstoppably – and permanently – cut off from access to each other and herald the collapse of civilization itself. Scalzi easily channels the kind of ironic humor that the late, great Douglas Adams was best known for, although he never went over the top in comedy.

If you're looking for something off the beaten path, I also enjoyed a series called The Murderbot Diaries by Martha Wells. I'm just a couple of books in the five-book series, but Wells' description of a confused rogue AI in a cyborg body, where absolutely everything is designed, serviced, and forcibly delivered by the lowest bidder, is both charming as well as engaging. The Murderbot has its own desires, needs, and goals – it's just not clear what that is, aside from doing a half-hearted job as possible to leave more time for trashy soap opera consumption.
– Jim Salter, technology reporter 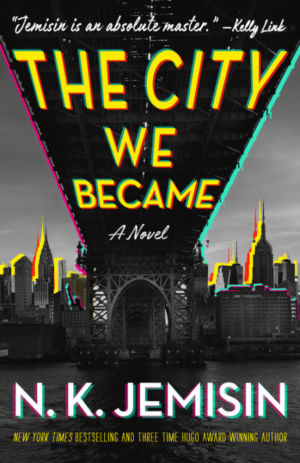 I read quite a bit – between 50 and 100 novels a year, most years – and I'm always happy to talk about books. In these quarantines, leaning and running away seem to be the two major categories in my reading. I stick to books that have been published over the past decade (without missing out on Lloyd Alexander and Terry Pratchett's annual comfort repetitions) and have a few thoughts.

If you like colorful crews in space: Becky Chambers & # 39; Wayfarer series, starting with The Long Way to a Small, Angry Planet. Chambers’s books are optimistic, character-based science fiction; Stories about people and how they feel in a strange and exciting future. Gentle and cozy reading.

Just this week I also finished the two previous books in Alex White's Salvagers series, starting with A Big Ship on the edge of the universe. Colorful crew of talented space pirates, but also with magic and a series of moral codes. Fast reading, real fun.

If you like cities: I can N.K. not recommend. Jemisin's latest issue, The City We Became, was high enough, especially if you love cities, and double, especially if you spent time in New York. I haven't lived in New York City since 2008 and I could still smell, feel and hear every single page. Cities have souls, and that's their story.

If you liked hidden characters: Mary Robinette Kowal's Lady Astronaut books, The Calculating Stars and The Fated Sky. As a Washington, DC resident, I didn't love having my home struck off the map at the start of the Apocalypse, but despite what a story of doom begins in history, it's an optimistic space fiction by Right Stuff finest.

And if you really want to lean into the apocalypse: Chuck Wendigs Wanderers is a pandemic of an animal-borne virus that hits mankind right in front of the landscape of a US presidential election year. It's the wrong book we should be reading in our current year 2020 if you tend to indulge in nightmares, but it's still a very good book.
– Kate Cox, Tech Policy Reporter

Jordan Peele and J.J. Abrams is one of the executive producers of HBO's Lovecraft Country.

Two sizes in the past

Now is the perfect time to read Lovecraft Country, the dark fantasy / horror novel by Matt Ruff from 2016, as HBO's adapted series will be released in August. It takes place in the Jim Crow era of the 1950s and is structured almost like a series of short stories, although everything is connected and wonderfully connected as a whole. The first quarter focuses on Atticus, a black Korean war veteran and great H.P. Lovecraft fan, despite the author's infamous racism. When his estranged father disappears and leaves a cryptic message, Atticus sets off from the south side of Chicago to rural Massachusetts. He is accompanied by his uncle George – editor of the Safe Negro Travel Guide – and his childhood friend, Letitia.

There are many cunning pointers to Lovecraft's work for the shrewd reader when we come across a secret cabal called Order of the Ancient Dawn, a haunted house, a strange pocket universe, time shifts, shape shifters, an evil mannequin, and a cursed book. However, what makes the book so awesome subversive is that the worst monsters are not elvish horrors or shoggoths in the forest; It is the strong racism and bigotry that our protagonists encounter along the way.

In addition, I have another recommendation: Iain Pears’s extensive 1997 novel, An Instance of Fingerpost. Partly historical thriller, partly philosophical thinking about the unreliability of human memory and personal stories – also known as the "Rashomon effect" from Akira Kurosawa's classic film from 1950 – the novel remains one of my favorite readings of all time, to which I return every few years. The title refers to a quote from Francis Bacon who believed that all evidence is fallible, and yet there can be "a one-way signpost pointing in one direction and not allowing any other option".

Pears is a former BBC reporter who achieved early success with his art history mysteries with fictional detective / art historian Jonathan Argyll. These novels are light and fun, but with finger mail, Pears reaches a whole new level of thematic complexity. It's almost as if he started writing a simple story about a 17th-century murder in Oxford and then got carried away when this world and its inhabitants came to life for him. It was rightly compared to Umberto Eco's bestseller The Name of the Rose from 1980, although I prefer finger mail.

This was a turbulent time of the Enlightenment, in which new scientific ideas blossomed and conflicted with religious institutions and political intrigue was everywhere. There are four sections, each told by a different character, each remembering their version of 1663 arsenic poisoning by a man named Robert Grove many years later. A maid confessed, but the four witnesses – an Italian doctor, the son of a suspected traitor to the Royalists, a cryptographer, and an archivist from Oxford – each identified another culprit, and only one will ultimately reveal the truth about what really happened. Pears are a masterful reminder of the restoration of England when Charles II regained the throne after Oliver Cromwell's short-lived attempt at a republic and his figures (historical and fictional figures) are very detailed. It is a long book but so exciting that you will be tempted to devour it as soon as possible and you will end up thinking about the nature of the truth.
– Jennifer Ouellette, senior writer