The Brydge Pro Plus has both great and terrible timing. Originally designed as a niche product to take advantage of iPadOS support, the Pro Plus trackpad suddenly looked much more practical when Apple significantly improved its functionality with the unexpected release of iPadOS 13.4 this month. Now, the iPad plus Brydge keyboard combination can be more like a laptop than ever.

However, Bryde's problem is that Apple has also announced its own iPad keyboard with a trackpad and a wild floating design, which the smaller company may be doing, Sherlocking. Brydge's keyboard costs less, so it's not necessarily a killer. However, there is another problem: it is not fully compatible with all of the iPad's new trackpad features.

Nevertheless, the Pro Plus has a few things to offer. It's available now, much cheaper, and has a more traditional laptop form factor – if you want to.

Brydge has been manufacturing iPad keyboards for a long time, and the Pro Plus is an evolution of its existing model for the latest iPad Pro design. Last year I said that the keyboard is the best option for anyone who wants their iPad to work more like a laptop. The Pro Plus works largely the same way: it is charged via USB-C, connected via Bluetooth and you plug the lower corners of the iPad into two rubberized hinges that do not cover the screen. Brydge also includes a leather back that magnetically attaches to your iPad. However, I couldn't use the one that came with my test device because it doesn't fit the larger camera on my 2020 iPad. (Brydge ships an updated cover with orders placed after the iPad was announced.)

As a keyboard, I don't have many complaints. I went back and forth between the Pro Plus and Apple's Desktop Magic Keyboard this week, and even though I'm testing the smaller 11-inch Brydge. It doesn't feel tight and I prefer the larger key travel. In contrast to Apple's own iPad keyboards, Brydge also contains a function line at the top with controls for screen brightness, backlight, etc. At least for me, this is a keyboard with a better feeling than anything Apple makes.

The combination is half a pound lighter than a MacBook Air

With the connected Pro Plus, the 11-inch iPad Pro turns into an adorable laptop. The design of the keyboard really corresponds to the iPad itself. It is a bit thicker than the tablet, but its aluminum frame has similar proportions. When you fold it up, something is left that is easy to throw in a pocket, while the flexible hinges make it easy to use on your lap. It weighs just over a pound, and the tablet-keyboard combination is about half a pound lighter than a MacBook Air.

The trackpad is also very good considering the size restrictions. It's hard to see how Brydge could have made it bigger, at least on the 11-inch model, but it's still pretty small. For comparison, it is dwarfed by the 12-inch MacBooks and feels more like a Surface Pro. I don't really think size is a problem for normal pointer controls – it's more than big enough to move the cursor from one side of the screen to the other. However, since the click action uses a normal springboard mechanism that rotates from above, the area that you can actually press is quite small. You have a little less space to work if you hold the button down with your thumb. I've used a lot of tap-to-click, which I never do on a Mac.

I think it's fine for anyone who isn't used to Apple's luxuriously sized laptop trackpads. However, size is the least problem with this trackpad. 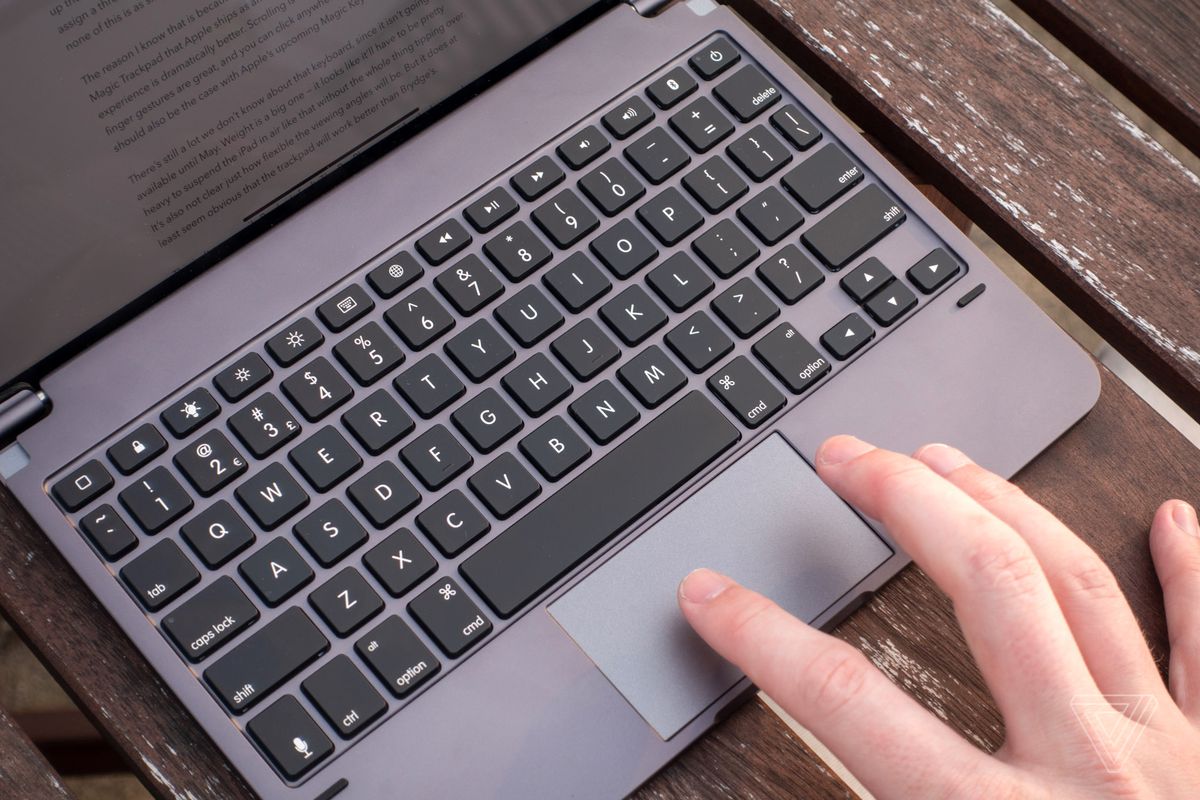 If you haven't used it yet, you know that iPadOS 13.4 pointer support is really enjoyable. The way the blob-like cursor swirls around and turns into different shapes and captures your likely typing goals with an auto first person shooter style goal is the most fun I've had with my mouse since my first time to Disneyland. I've always been skeptical of the idea of ​​screwing Mac-style mouse pointers on iOS, but Apple didn't do that here. It feels completely native to the iPad and doesn't affect the user interface with your finger at first.

Much of this is true when you use the Brydge Pro Plus. The trackpad works well as a one-finger facsimile. It's responsive and precise, and better than many laptops in that regard. My main use case for an iPad trackpad is text editing. Despite the slightly cramped size, the Pro Plus is fine if you want to select a series of texts or move the cursor without touching the screen. That alone is enough to make this keyboard the most useful Brydge has ever made.

The real problem is that the multi-finger gestures are inconsistent at best and unusable at worst. For example, scrolling with two fingers works, but its behavior is completely different for apps. It's okay in Safari, if a bit jerky. In Twitter it's out of control and you'll be zoomed through your timeline at an unreadable pace. And in Slack there seem to be completely different speeds, regardless of whether you scroll in the channel list or in the chat itself.

Meanwhile, three-finger gestures are not supported at all. iPadOS 13.4 includes functions in the iPhone X style, e.g. For example, swipe up with three fingers to return to the home screen, or the multitasking menu depending on how long you hold it down. That just doesn't work with the Brydge Pro Plus. There are alternative solutions. In this case, swipe down at the bottom of the screen to bring up the Dock, then return home and multitask again. 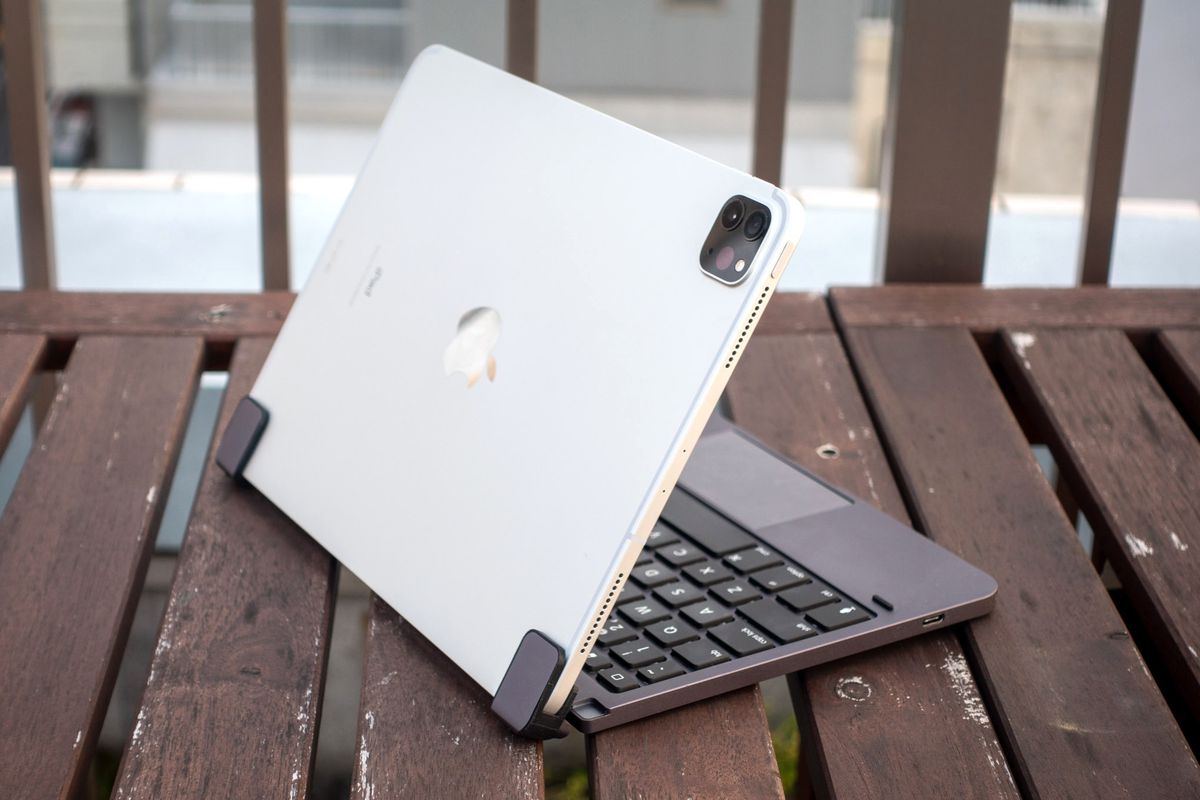 You can also resort to more complicated workarounds by delving into the accessibility settings. There you can assign a three-finger tip to the app switcher, which helps a little. Some of the settings suggested by Brydge mean that the virtual home button will appear on your screen when the keyboard is not connected. None of this is as chic as what Apple designed.

The reason I know this is that I also used my iPad Pro with the Magic Trackpad that Apple provides as an option for the iMac, and the experience is dramatically better. Scrolling is smooth everywhere, the three-finger gestures are great, and you can click anywhere on the surface. This should also be the case with Apple's new Magic Keyboard for the iPad.

We don't know much about this keyboard yet, as it won't be available until May. The weight is heavy – it looks like it would have to be quite heavy to hang the iPad up in the air without it tipping over. It is also not clear how flexible the viewing angles will be. But at least it seems obvious that the trackpad works better than that of Brydge.

This is not necessarily Bryde's fault. The Pro Plus was obviously developed before iPadOS 13.4 and would have been as good a solution to the previous state of things as one would have hoped for. Brydge tells me that it will work on improvements and make them available to anyone who buys the Pro Plus, but it is not clear how extensive optimizations can be. And you know what we always say about buying hardware based on future software promises. 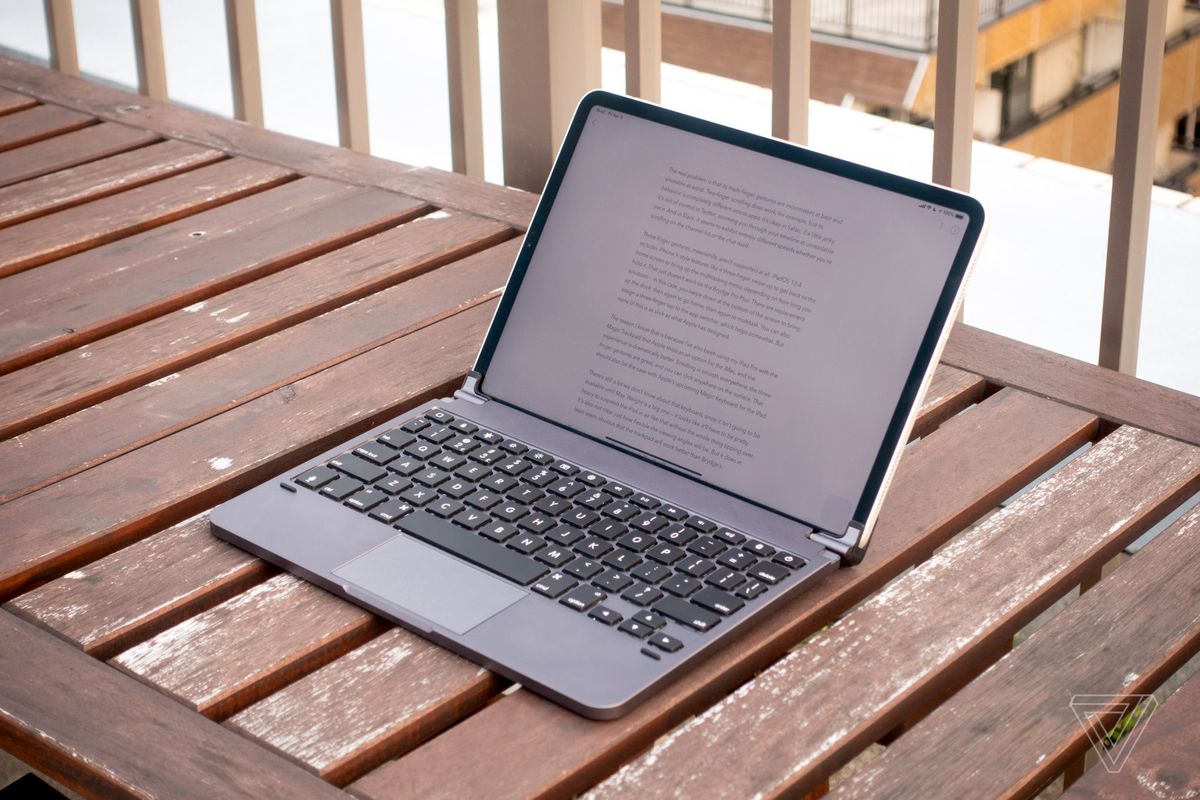 At the moment, I can't recommend the Brydge Pro Plus to anyone who wants to drop $ 299 or $ 349 on Apple's Magic Keyboard next month – you should at least wait to see how that turns out. At $ 199 for the 11-inch model and $ 229 for the 12.9-inch model, you can save some money with the Brydge. If you're more interested in the typing experience and the laptop form factor, this may still be a good option. I should repeat that this is the best Brydge keyboard so far.

However, the Pro Plus is a frustrating device, as Brydge clearly did everything it could to get it going before the iPadOS 13.4 carpet was swept out. That said, the Brydge Pro is a better product than it would have been, but maybe not as good as it could be in theory, and probably not as good as its upcoming competitor. While the Pro Plus almost turns the iPad Pro into a fantastic little laptop, it is currently not enough.