Cruise, General Motors' self-driving car company, is doubling the Origin, its autonomous passenger driver with no steering wheel and pedal, launched late last year. As the COVID-19 pandemic is preventing many people from using shared driving services, the company introduced new security protocols designed to keep people socially out of the way while driving and rehabilitate the vehicle between fares.

Cruise also applies for federal government permission to mass-produce the Origin. The lack of traditional human controls on the vehicle means the company needs an exemption from the federal government's motor vehicle safety standards that require vehicles to have a steering wheel and pedals. The National Highway Traffic Safety Administration (NHTSA) only grants 2,500 such exemptions per year. (There are laws in place to bring that number to 25,000, but it's currently bogged down in the Senate.)

In 2018, GM filed an application for permission to use a fully driverless Chevy Bolt, but never received a definitive response from NHTSA. That exemption is now being withdrawn in favor of the origin-related petition, Cruise says.

The new protocols as well as the exception regulation should also send a message that Cruise has committed itself to safely start a joint Robotaxi service in the near future. The coronavirus pandemic has rocked the transportation world, causing a sharp drop in hail services like Uber and Lyft. These companies are now trying to make a comeback based largely on strict rules that require masks and detergents. 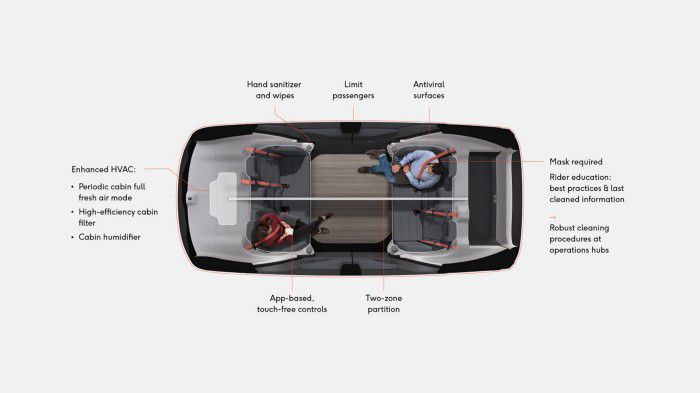 Cruise has not yet started a hail protection service and has not released a working version of the Origin either. However, the company wants to anticipate any speculation that COVID will destroy future demand for shared mobility services.

"COVID-19 has changed everything, including the way many people think about shared vehicles," wrote Robert Grant, vice president of global government affairs for Cruise, in a blog post. "Sharing everything, it feels like now, is a threat to our health."

Grant says the Origin's cab will have a plastic partition that runs down the middle. Only two passengers are allowed on the vehicle at a time, and the company's ventilation system provides air circulation. Masks are required and hand sanitizer and wipes are provided. The vehicle does not have a driver, so these protocols only apply to passengers.

Cruise has a beta ride hail service, but it is only available to employees. The company won't say when it will be available to the general public. Cruise won't say when the Origin will hit the market either, but does promise to release more information about its production plans in the future. The vehicle is manufactured at GM's Detroit-Hamtramck facility, which was recently renamed Factory Zero.

Cruise is under pressure from its investors, namely Softbank, to start a commercial taxi service. The company recently received approval from the California Department of Motor Vehicles to test fully driverless, driverless cars for human safety in San Francisco.

The company's safety drivers have complained about a lack of safety standards during the pandemic and subsequent forest fires. They accuse Cruise of using his self-driving cars during the spring lockdown, despite public health regulations prohibiting unnecessary travel. And they say Cruise is not doing enough to protect them during these public health crises.