Foxconn’s buildings in Wisconsin are nonetheless empty, one 12 months later

In April last year, The Verge reported that Foxconn's "innovation centers" scattered across Wisconsin were largely empty and renovations had stalled. A few days after the publication of this article, Foxconn held a press conference to announce that it had bought another building and told reporters that The Verge's coverage was incorrect.

In particular, Alan Yeung of Foxconn said the story of The Verge "has a lot of inaccuracies, and we'll actually correct and explain it."

"I can assure you that they are not empty," said Yeung. "But we also don't want people to climb trees and look over to make sure we're occupied." (For the record: Nobody ever climbed trees. We just looked in the window.)

Yeung continued. "We are not actually trying to buy buildings to leave them empty. We have a plan and we will make sure that the building is adequate and well equipped before we move people in," he said. "So you will be in the next Months, next year or so much more, "said Yeung.

"I can assure you that it will not be empty and they are not currently empty," he added.

"They're not empty at the moment" was a strange way of describing buildings that looked like this in April 2019:

The Foxconn "Innovation Center" in Eau Claire in April 2019

Photo by Joshua Dzieza / The Verge

Yeung made these comments on April 12, 2019. It is now April 12, 2020, exactly one year since Foxconn promised an explanation or correction to The Verge's report on empty buildings in Wisconsin. This statement or correction never came.

And the buildings are still empty. 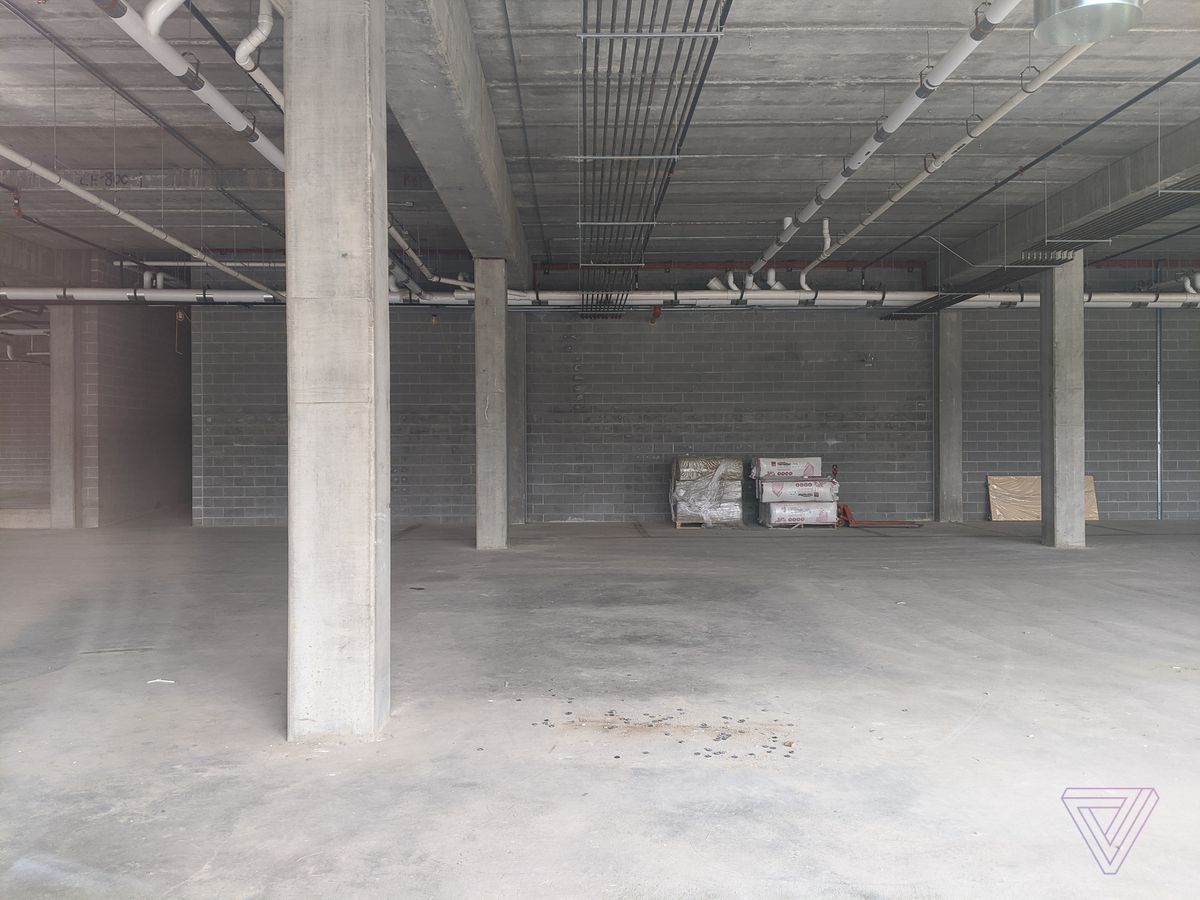 The Foxconn “Innovation Center” in Eau Claire, Wisconsin on April 10, 2020

Foxconn originally promised to convert two buildings in Eau Claire into office space and research facilities. It has never bought one of the buildings and has not given any significant building permits for the other, the glass front building shown above in the city center.

Matt Jewel, an engineering professor at the nearby University of Wisconsin-Eau Claire that Foxconn was to recruit from, said the property had "no visible activity at all." Foxconn was also absent from the school's career fair this February.

The Green Bay innovation center has also made no progress. In October 2019, WPR reported that the projects were apparently suspended. A few days later, Foxconn said it was still planning to develop the innovation centers, and the company appeared to be restarting at least some of the projects and selecting contractors to renovate a floor of its Green Bay building. At that time, the company was planning to renovate 4,800 square meters of office space to hold corporate events and recruitment campaigns. The original plan was to employ 200 people in an area of ​​16,000 square meters.

At the end of 2019, Foxconn presented plans for an even smaller area: 3,500 square meters of office space for 49 people, according to Kevin Vonck, head of development at Green Bay. However, no permits have been issued and construction has yet to begin.

"I haven't heard from the Foxconn team lately."

"I haven't heard from the Foxconn team lately," said Wendy Townsend, project manager at the Green Bay Department for Community and Economic Development. "They tend to be on the quieter side."

A search for documents for Foxconn's property in Madison did not result in a building permit, and other tenants in the building saw no Foxconn employees.

At the end of last year, the company received permission to convert 1,451 square meters in its Racine building. However, it is unclear whether construction work has been carried out. (Foxconn had originally announced it would remodel 20,000 square meters and open in January 2019.) Racine and Madison officials did not respond to a request for property updates.

At Foxconn's headquarters in Milwaukee, a seven-story downtown building that should also house an innovation center, the key permits the company has applied for are elevator renovations and an exit door. In January Ixonia Bank moved to the first floor of the building.

Foxconn has continued to lease its Green Bay building to other companies, said Vonck. The innovation centers in Madison and Racine are still occupied by the banks that were there before Foxconn bought the buildings.

A former Foxconn employee told The Verge that the company could never quite figure out what to do with the innovation centers. "They were a constant linchpin," he said. At some point, the company planned to turn them into WeWork-style coworking spaces. But he said the leases were also one of the few revenue-generating projects Foxconn had in Wisconsin.

“During my entire time at Foxconn, only the rooms in which we rented tenants were profitable. Nothing else brought profit or sales, ”he said. "For those who were completely empty like in Eau Claire, we obviously didn't bring anything in. That was a loss."

Foxconn's main project – the Mount Pleasant factory – appears to be making progress, albeit on a much smaller scale than the massive Generation 10.5 LCD manufacturing facility that was originally promised and specified in the company's contract with the state.

Earlier this month, the company submitted a project report to the state claiming that it currently employs more than 550 people, enough to qualify for lucrative subsidies. (Most were discontinued late last year.) And although no LCD manufacturing equipment has arrived at the factory, Foxconn has announced a giant glass dome that will house a data center, as well as offerings for manufacturing robotic coffee kiosks and alarm system components in a manufacturing strategy , which is referred to as a "high-mix, low-to-medium volume". And last week, Foxconn and Medtronic announced plans to build fans at the plant within four to six weeks.

However, it is unclear whether Foxconn will receive subsidies. The state has repeatedly warned Foxconn that the contract should be revised because it is building a completely different type of factory from the one originally described in the contract and has brought in a Foxconn subsidiary that was not originally part of the business. Foxconn has refused to review the contract again. It is also worth noting that Foxconn claimed to have 189 full-time employees last year, but a subsequent review revealed that only 113 met the contract's criteria.

In a statement, Missy Hughes, CEO of the Wisconsin Economic Development Corporation overseeing the deal, told The Verge that Foxconn's report is under review and review and that negotiations on the contract are ongoing. "Our talks with Foxconn about adapting the contract to the project will continue. WEDC's goal is to do so to support the project," said Hughes.

The factory is scheduled to open in May – Foxconn has rated the construction as "essential" and work will continue under Wisconsin's "Stay-at-Home" order. It is unclear what exactly the factory will produce when it is put into operation.

Foxconn did not respond to a request for comment.

South Korea To Ship 6 Lakh Coronavirus Testing Kits To US