Gloomhaven: Jaws of the Lion makes the megahit extra accessible

Enlarge /. There's still a lot of stuff in that box.

There's a reason Gloomhaven (read our 2017 recap) is so popular. There's also a reason half of my friends who own a copy have opened it once, stared desperately at the contents, and released a shy fart as they put the package back together. "More is better!" can be true, especially when it comes to fighting your way through a dungeon. "More" means more monsters, more classes, more loot – even additional types of masonry that adorn the corridors. It also means more. To learn more. More to remember. More to sort and keep sorted. Gloomhaven basically defines "more". 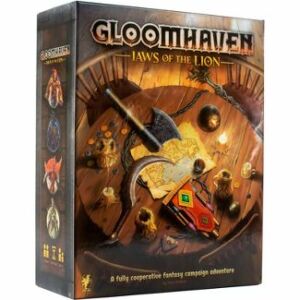 But now there's Gloomhaven: Jaws of the Lion, the biggest box that has ever felt small. With just four classes, a single (mostly) linear campaign, and some clever quality of life improvements, this is Isaac Childres' attempt to make a Gloomhaven for the rest of us. (Or the rest of you, since playing Gloomhaven until I was really sick of it.)

How does Childres go about rationalizing a game so monolithic that it once gave sentience to a chimpanzee? The answer is: easier entry into the game systems, fewer components and a more focused quest line. Let's take these one at a time, as each one has more to offer than you might think, including some cons to consider if you're already curious about how to immerse yourself in Gloomhaven.

Tutorials get a bad rap. I'm mostly talking about video games where tutorials have been a staple ever since we decided together not to read the manual. The problem is twofold: either the game is what we already know how to look around and click to shoot, or it doesn't really break down all of the little subsystems that make the game purr. A good tutorial is to walk a tightrope between talking to us as if we've been living in a cave for fifteen years and assuming we have a PhD on interpreting game design intent. Yeah i know how to move the mouse. No, I don't know why my king is in love with his biological sister. Meet me halfway here, game.

Jaws of the Lion is one of the few modern board games where you can try a tutorial. This is largely a success. The original Gloomhaven didn't exactly throw its players into whitewater rapids, but "Deep End" wouldn't be an exaggeration. Here the focus is entirely on the good: the game's novel card system, not the fact that you lose hit points until you fall over.

Each round is about choosing two of your hero's cards. These cards determine the order in which you move, both in relation to your fellow adventurers and the enemies crowding the table, as well as the moves and attacks you will make. The problem is that you have to use the top half of one card, usually an attack or spell, and the bottom half of the other card in order to reposition yourself on the board. This may sound breezy, but the game quickly teaches you that dealt cards are discarded, limiting your options until you are forced to take a breather.

Enlarge /. Gloomhaven's card system has always been one when it is mainly drawn. Got it? Draws?

Each of these concepts will be conveyed in the course of the first scenarios. First, you'll learn how to pair cards to move and attack, then how to navigate your environment, manage the decks that regulate enemy action, charge elements to amplify your movements, and finally, how to stand against one Claim mini boss. With each fight, new maps and concepts trickle out, adding options without overwhelming you. While the first scenario works almost like hitting the dummies that fall over to get back in your face, in the sixth scenario you have almost everything under control that you need to know to play Gloomhaven.

Here's the good news: it works. After answering hundreds of rule questions on the BoardGameGeek forums, Childres understands which concepts go without saying and which ones need reinforcement. The downside is that this isn't just a tutorial for the rules of the game. It's also a tutorial on how to play Jaws of the Lion. As in, from a single consistent group. Ideally one who is patient enough for the specifics of the game, e.g. B. the choice of when to rest and who breaks it next door. Oh, and you should be fine playing the same character for a long time.

Enlarge /. The campaign book provides the cards with a supplementary book for the big ones.

This last point is one of the biggest Jaws of the Lion departures from Gloomhaven's big box and needs some explanation. At first glance, this is the standard rate for Save the City. You're big damn heroes, there are big damn monsters, and we all know the rest. What sets the game apart from its relatives is not just its card system, but the way it approaches its characters, all of which are refreshingly resourceful.

My character was the hatchet. The hatchet is large, furry, and horned, and looks like a normal close-range bruise. Unless it's not. He is a ranged fighter who throws hand axes, tomahawks, cleavers, mats, and other powerful bladed devices whose names I have forgotten, and often hits multiple targets in the same round. More importantly, it hits hard as if dealing melee damage rather than throwing things around the room.

Over time, the hatchet becomes even more interesting. He has a preferred blade that can be inserted into a large monster for bonus damage and then inflicts even more bonus damage each round until the monster dies and the hatchet reclaims its favorite. He also has a supply scrap that is similar to throwing a healing box into an opponent's head so they can bounce back to heal a friend. Instead of playing the ranged fighter directly, he has his own tricks and spells that make him a skilled fighter in several ways.

And it's a good thing I loved playing as him, because Jaws of the Lion only features four heroes. It's a bit of a spoiler to say exactly how many classes were in the original game. Suffice it to say, there was more to it, with a pension system that allowed players to swap their character for another in the middle of the campaign. Like some of Gloomhaven's other ideas, this was awkward at times – one of my friends had a retirement goal he never seemed to achieve – but it brought the game's commitment to variety to the fore.

In contrast, Jaws of the Lion are necessarily reduced. Don't get me wrong, there are still plenty of monsters to kill and maps to explore. Indeed, the map tiles have completely disappeared and are being replaced with a campaign book, which is quickly set up by switching to the correct page and placing some obstacle and treasure markers in the right places. This is especially an improvement as less time is spent digging for the right tiles, accessories, and everything else while sacrificing a scenario generator or wide branching paths in the campaign, for example.

Enlarge /. Another highlight is the way monsters are activated and attacked.

The emphasis on a campaign book explains both the improvements and limitations of Jaws of the Lion. Upon opening the box, there is a setup sheet that explains how to pack all of the monster components. On the very first page of the set of rules you have set up the first scenario. The character decks are sorted into small groups of cards to make it easier for players to get started with the system. Everything is designed to get you over that initial hump and move you through one scenario at a time. Think of it like a drawbridge. Where previously you were expected to swim the moat and climb the pinnacles, you are now greeted by the front gate.

What made Gloomhaven so exciting, however, was that tough challenge, the thrill of being able to claim you managed the swim, survived this climb, and was breathing on the other side. This is not a "real player" that I am talking about. It's the joy of being immersed in a system that is playable but a little overgrown and finding your own indulgence in that huge box of toys.

The process of focusing is also the process of narrowing. Jaws of the Lion is made Gloomhaven more focused and narrow. It's still cerebral, still smart, and still resourceful – and best for those who previously viewed the trip with intimidation rather than pleasure.