The Golden State Killer, believed to be responsible for at least 50 house invasion rapes and a dozen murders, terrorized California in the 1970s and 1980s. But his story finally fell off the radar, though his identity remained undetected for decades.

In 2013, Los Angeles magazine published writer Michelle McNamara's article about her attempts to track him down, which in turn led to a book. McNamara died in her sleep at the age of 46 from undiagnosed heart disease and an accidental overdose of prescription medication in 2016, but her book "I'll be in the dark" was published posthumously in 2018 – just two months before Joseph James DeAngelo was arrested and charged with the crimes.

Now the book is the subject of a six-part documentary of the same name, which premieres on HBO this Sunday. Directed by Liz Garbus (Lost Girls, What Happened, Miss Simone?), The series – like the book – looks at McNamara's search for the killer. It also gives viewers more information about the background of DeAngelo and spends a lot of time telling the stories of the victims – many of whom hadn't previously spoken much about their exams in front of the camera.

Michelle McNamara's posthumously published book "I will be gone in the dark" is the focus of the six-part HBO documentaries. Robyn Von Swank / HBO

It was important for Garbus and her team to be respectful of what the victims of the Golden State Killer had experienced. The series deals intensively with the prevailing attitude towards rape in the 1970s, why survivors and their families often remained silent and the "ongoing trauma and recovery" to be victims. Getting people to open up in front of the camera was probably also helped by working on “Team Michelle,” says Garbus.

"There was a feeling that we would look at the whole ordeal very seriously and respectfully and it wouldn't be reduced to an exploitative soundbite," Garbus told Fortune.

"The common goal of everyone was to tell the story of Michelle McNamara and find out who she was, and the story of this case from a victim perspective, because I think it's a story that hasn't been fully told yet." says Paul Haynes, McNamara's researcher, who helped complete the book by working with investigative journalist Billy Jensen and McNamara's widower, comedian Patton Oswalt.

Haynes, who can also be seen in the documentaries, found Garbus' approach compassionate and empathetic – much like McNamara's work. "The taste and emotional response of the series are very much in line with that of Michelle's book," he says.

Actress Amy Ryan tells excerpts from McNamara's book in the series, but these words are also complemented by old McNamara video footage and email and text exchanges with colleagues and family. Oswalt, who is interviewed throughout the series, played a key role in providing this access to the film team.

"He handed over her cell phone, iPad, and hard drive, and we had access to all of the research boxes she called" Mother Lode, "" says Garbus, who had more to do with McNamara than she expected. She learned details about it the life of the author. "He was really very generous and accommodating, and he basically just wanted us to delve there and tell such a true story of Michelle and her life and obsessions as we could find." 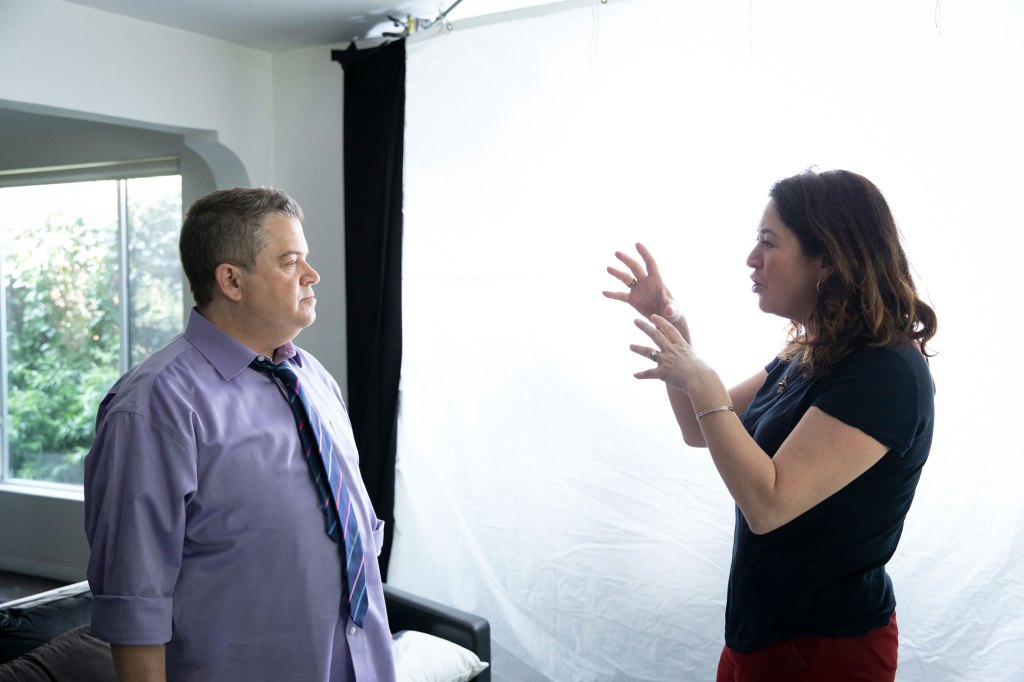 Liz Garbus (right) stages Patton Oswalt in HBO's "I will be gone in the dark". Oswalt was "generous" in exchanging McNamara's research and additional information for the documentaries, says the director.
Courtesy of HBO

Garbus and her team also had to adapt as the story progressed, which was not entirely unexpected. "In a documentary, unlike in a screenplay situation, you know that you are driving," says Garbus. "You don't have a fixed mantra of" This is where the film begins and this is the end. "

But DeAngelo's arrest took place "literally on the first day of the shootout," she says. "The idea that it happened so quickly? We were very surprised. "

The crew used this development as an opportunity to see if anyone could "shed light" on who the alleged murderer was. As a result, some relatives of DeAngelo and his ex-fiance appear on the series.

"It was really difficult to get these people to open up," says Garbus. "You only see that after a crime like this, there is a completely different layer of harm and trauma … His family members go through their own kind of secondary trauma."

Haynes, who has spent years investigating the case, claims that McNamara's work played a role in the arrest.

“Although some have argued that Michelle did not solve the case and the book had no effect on the solution of the case, I have always argued differently because Michelle's involvement in the case put a spotlight on him that did not exist before. ”Says Haynes, who admits that recent advances in the investigation felt bittersweet in McNamara's absence.

"In the case of colds, the municipalities often have no motivation to shower resources for what they see as stale cases – unless of course there is renewed public interest," he says. "Michelle's persistence and the caliber of the work she did helped to arouse public interest, which the case had never seen."

Garbus has her own anecdote about how McNamara helped investigators connect the dots. The series deals with various police jurisdictions that were isolated and barely communicated with each other at the height of the Golden State Killer's activities, which Garbus said were "counterproductive" to solving the case.

"Michelle was actually a factor in bringing them all together," she says. "We didn't have time to include this in the film, but she actually held a buffet – a wonderful dinner for all these different law enforcement agencies to get together and share information, and promised Patton Oswalt as entertainment to entice them to enter And you did it. And everyone spoke to each other and we have a record of it. "

In recent weeks, it has been reported that DeAngelo will plead guilty on June 29 to avoid the death penalty while taking responsibility for the crimes. If so, it could offer a degree to the survivors with whom Garbus spoke, especially those who, due to limitation periods or lack of DNA evidence, are not counted as part of the case, although "they cannot speak for everyone." ”

As Garbus continues to follow what's next, she ultimately hopes that her project can serve as "evidence of the survivors' strength" and "evidence of Michelle and her work" even if episodes of the documentaries are broadcast.

"I really think that ultimately it's about trauma and healing and it's talked about – not pushing your demons down and just hoping they will go away," says Garbus. "But I think what is very clear is whether it is Michelle and her own demons, the survivors and her trauma recovery, that you cannot push them away and that they will eventually come to light and you need people around you and time to heal . "