Since the world is currently in an apparently permanent crisis, you may not be in the market for a new email address. And why would you be? Even in the best of times, getting a new email address is tediously changing your phone number without the slight upgrades that a new phone entails. Changing your email address is a futile struggle in a world in which the options available, even if they are unremarkable, work perfectly well. Actually like a bank change. Or move to a new apartment in the same building.

In any case, I am sorry to say that it is time to get a new email address. The reason is Hey, a new email service from Basecamp. It's a really original version of messages, which feels like the first interesting event for emails, as clever apps like Mailbox and Sparrow have re-used your Gmail account. As of today, it is available in an open beta. With a price tag of $ 99 a year and some keen opinions on how email should work, Hey isn't for everyone, or even most people. But if you're scrubbing at the stagnation of Gmail and Outlook, or just looking for a way to screen out most of the people who would ever send you a message, Hey is worth considering.

"The last time anyone was really into email was like 16 years ago when Gmail was launched," said Jason Fried, founder and CEO of Basecamp. “Not much has changed since then. … We try to bring some new philosophical points of view. "

"The last time anyone loved email was 16 years ago."

Hey's main lesson is that after 16 years of Gmail and Outlook and years of Hotmail and other services, we have a good idea of ​​what email really is. And in Hey's view, email is essentially three things. They are things you have to react to, things you want to read and receipts. Everyone gets their own home in the app, and basically nothing else is welcome.

All of this is in line with one of the new philosophical points of view that Basecamp wanted to bring to Basecamp, which is that not too many people should email you. When someone sends a message to your Hey.com email address for the first time, it arrives in a waiting pen for first-time senders. In your free time, you can search the various people, newsletters and marketing messages and hope for a place in your inbox. From there, you can decide where they belong – or whether they don't belong in your email at all. With a click of the thumb down, the sender disappears forever. (Unless you feel sorry for them and restore them via a setting elsewhere in the app in the inbox.)

"You actually receive fewer emails – that's what we want to achieve," says Fried. 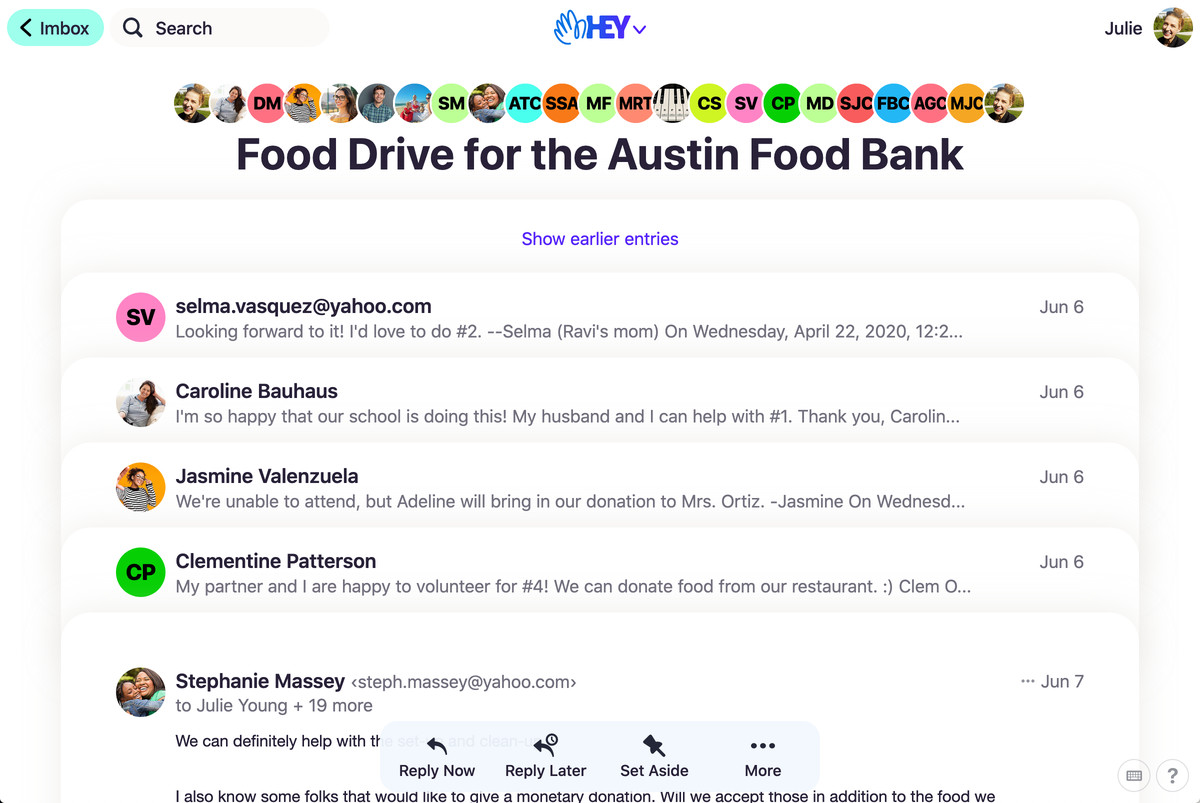 But with Hey, you don't just decide what goes into your inbox – you decide where to go. When you check a first-time sender, they are moved to Hey's inbox by default. Hey calls the inbox for no reason. (It's short for "important box" and no thanks.)

Emails from friends, family, and co-workers that you may want to keep in your inbox. All unread emails are shown at the top, and previously read emails are shown in reverse chronological order below. Gmail prompts you to archive old email and search it if necessary. Hey keeps an eye on everything and gives the whole concept of Inbox Zero a fat middle finger.

Many necessary emails consist of receipts, shipping notifications and other ephemera. With Hey, you can filter all of that into a section called "Paper Trail". For longer reading processes such as editorial newsletters or electronic catalogs, there is a section called "The Feed" in which you can surf: the e-mail inbox as an RSS reader. 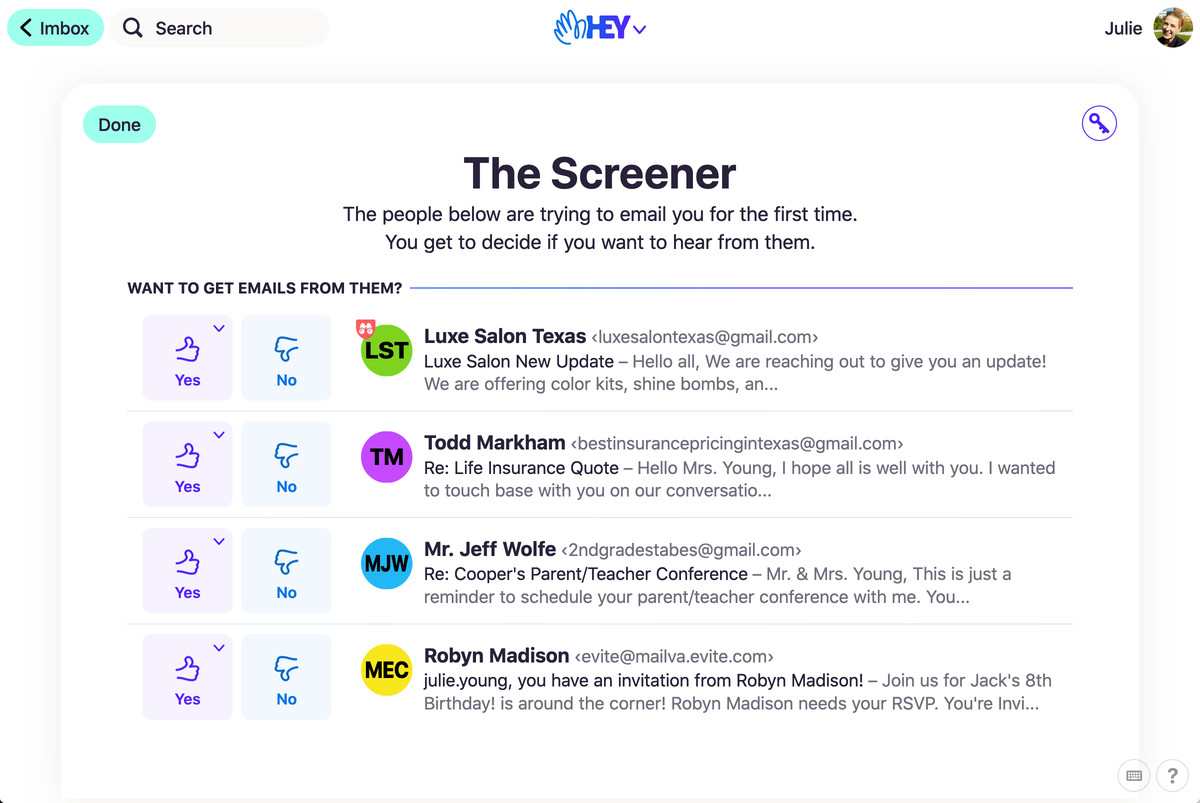 But what about emails that actually require an answer? These messages also have their own area. Under each email is a button labeled "Reply Now" and a second button labeled "Reply Later". Click on the latter and the message will be added to an attractive stack at the bottom of your imbox. When you're ready to reply, click the "Reply Later" batch to view your emails that require replies in a clever side-by-side view called "Focus and Reply." The original is in one area and your answer is in another. With the setup, you can quickly search a large batch of emails. This is a significant improvement over the hopscotching required for Gmail and Outlook.

The last category that Hey makes room for is emails that you want to keep on hand for some reason. Maybe it's a movie ticket, a boarding pass, or a receipt. You can mark the message as "put aside" and it will be displayed in a dedicated viewer if necessary.

Hey also has a file viewer that allows you to view every attachment in your inbox. This seems to be something Gmail might have thought of for the past 16 years. (Outlook did it.) Click "All Files" and you will see the attachments sent to you by people in reverse chronological order. This is hardly revolutionary, but it could be a revelation for Gmail users. (One problem: you can't preview a file by clicking it. Instead, clicking the thumbnail will download the file to your computer.) 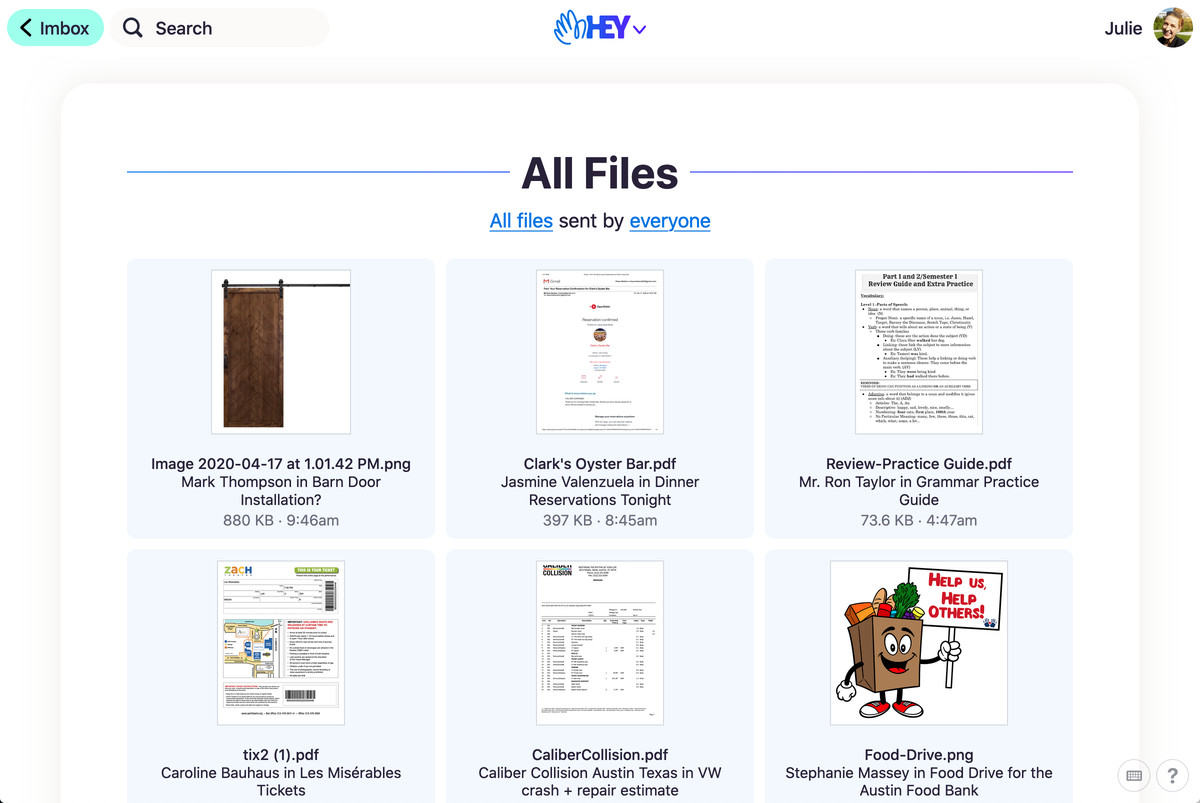 If you're a label person, you can add labels to create custom groupings for your emails. But there are no stars, flags, or other ways to distinguish your emails, because in Hey's opinion, they're "workaround hacks that can mean one in a million things," Fried said. Answer or not answer: there is no star and no flag.

Another nice touch in Hey is a feature called clippings. When you see something you like in an email, you can highlight it and it will be added to a collection of other highlights that you can view at any time. (Think of Kindle highlights, but for email.) It's not something you couldn't do in a simple text file, but I can see that it will be a nice archive for digital pack rates – especially for those who have a lot Read newsletters in your inboxes. Or you can just use it to quickly access confirmation numbers and other useful details.

Since Hey is an email platform and not just a new interface for Gmail or Exchange, Hey can do other weird and powerful things too. For example, you can merge different email threads into one to make browsing easier. (This does not affect how the recipient will end up viewing the email.) You can also change the subject line of an email to one that is more useful to you, without changing it for the person you correspond with.

"Most apps think they're the center of the world."

Hey has other opinions. It blocks all tracking pixels and disables read receipts and other monitoring functions. It will insist that you use two-factor authentication, for example – and also via the QR code. none of this insecure SMS business. You can try it before charging, but only for 14 days. The apps will not notify you of new emails at all unless you tell them to do so. Hey is generally so skeptical about the idea of ​​emails that you need to enable notifications per sender.

Hey is not the first independent email platform since Gmail. ProtonMail, for example, has been open to the public since 2016. Silicon Valley was recently excited about Superhuman, a $ 30 monthly service that uses Gmail's servers to provide a fast, alternate user interface. (After six years it is still in closed beta, which confirms the idea that it is a country club for the most important emailers in business.)

Hey is cheaper than Superhuman, but much more expensive than a Gmail or Outlook.com account. And as unwieldy as these giants are, they also have developer ecosystems full of extensions that can replicate various aspects of Hey's offering. You can also choose one of many services that re-sketch Outlook or Gmail, e.g. B. Mailplane, Airmail or Newton (no relationship to the author).

But I'm not sure if any of them fit Hey because of their boldness. Basecamp has only 56 employees and in two years they have launched an email platform and created six native clients – iOS, Android, Web, Mac, Windows and Linux. After frequent advertising by Fried and his co-founder David Heinemeier Hansson – they have more than 650,000 Twitter followers – more than 50,000 people have joined a waiting list to try Hey. Over the next few weeks, people will be removed from the waiting list to use them.

"It's the most ambitious thing we've ever done."

Fried has no illusions that he will destroy Gmail. "It's the most ambitious thing we've ever done," he says. "And I would also say that the stupidest thing we have ever done – in the most positive sense of the word. We only say that we want to offer an alternative. We want to do some things that we think must be done in order to E -Mail to solve. "

In contrast to most of the founders I spoke to, Fried is happy when Hey can attract 100,000 customers. A corporate version will be released later, with features for teams, and could help Hey grow beyond an initial audience of base camp cultists and productivity nerds.

In the meantime, Hey is giving email users new ideas everywhere. And there is something the technology giants that they urgently need: competition.