Beyoncé demands justice for Breonna Taylor in a way that is easy to repeat. On June 14, the singer posted an open letter to Kentucky Attorney General Daniel Cameron on her website. In the message, she called for "swift and decisive action" on Breonna's behalf – specifically, that charges should be brought against the Louisville officials involved in Breonna's death.

"Three months have passed – and the LMPD's investigations have generated more questions than answers," Beyoncé wrote. "Her incident report states that Ms. Taylor has not been injured – however, we do know that she was shot at least eight times. LMPD officials claim they announced before entering Ms. Taylor's home – but her friend, who is at she was when, as well as several neighbors, all say that this is not true. "

"After a terrible tragedy, don't let this case fall into the pattern of inaction."

She went on to say, "Three months have passed – and no arrests have been made and no officials have been released. The LMPD's investigation has been forwarded to your office, and yet all the officers involved in the shootout remain employed by the LMPD. Sgt. Jonathan Mattingly and the officers Employees Myles Cosgrove and Brett Hankison must be held accountable for their actions.

"Three months have passed – and Breonna Taylor's family is still waiting for justice. Ms. Taylor's family could not take the time to process and mourn. Instead, they have worked tirelessly to support friends, their community, and the community gather land to get justice for Breonna. "

Beyoncé asked the Attorney General to take three clear steps to honor Breonna: to file a criminal complaint against the three officers, to commit to transparency in investigating their behavior, and to investigate the LMPD's response to Breonna's murder. "After a terrible tragedy, do not let this case fall into the pattern of inaction. Every time a black person dies by the police, there are two real tragedies: death itself and the ensuing inactivity and delays," she wrote. "This is your chance to end this pattern. Take quick and determined measures to indict the officials. The next few months may not look like the last three."

Take a look at their full letter and consider voting for Breonna by writing your own message to the address provided by Beyoncé. You can also sign a petition calling for charges against the officials and visit the campaign website #BirthdayForBreonna for more action items. 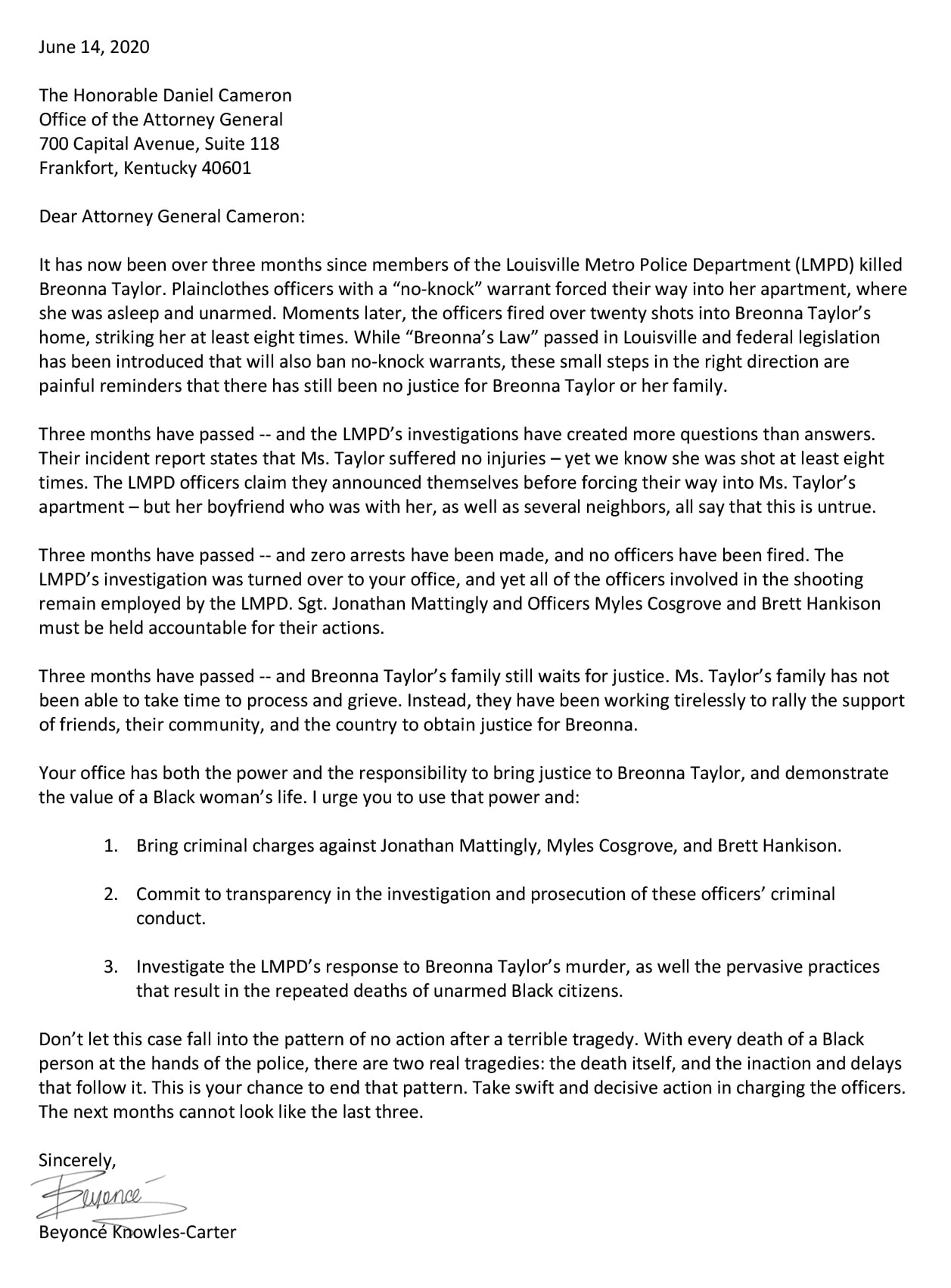