Tools like Twine have made it easier than ever to create interactive text-based games. Although they can be easy to create, telling an exciting story is not easier. As a writer, there is nowhere to hide: there are no graphic avatars that the player can control, or music and speech to tell the story. It's just words and hyperlinks. Nevertheless, games like Lionkiller show how exciting and powerful interactive fiction can be – even if they can only work with words.

Lionkiller is a reinterpretation of the legend of the famous Chinese warrior Hua Mulan from the 4th or 5th century. It deviates from the original source material and the well-known Disney adaptation by playing the story in the first half of the Opium Wars between Chinese and British in the mid-19th century. It is a war that started because British merchants smuggled and sold illegally addictive opium in an attempt to compensate for their trade deficit in luxury goods from China. The Chinese government was not particularly interested, to say the least.

Lionkiller starts with Mulan working in a flower shop, and the decisions you make affect how your story plays out in both small and large ways, similar to games like Life is Strange or Telltales The Walking Dead. Is Mulan joining the army to prevent her father from being drafted? Or her brother who escaped? Or maybe instead of her love interest so that she can live her dream?

It is not these decisions that concern you and interact with history. Instead, it's a combination of writing – which is short but effective – and the way text links are used almost like cuts in a movie or TV show. In fact, all Twine games are a series of web pages full of text that have colored text links that you click to go from one page to the next, or sometimes add, remove, or change the text on the current page him. 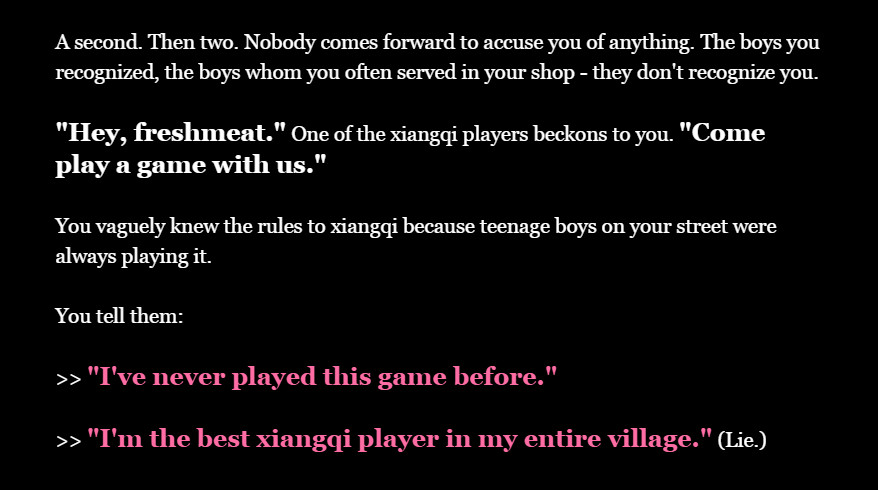 In Lionkiller, each of these pages feels less like reading a page from a book, but more like a shot or a moment in a larger movie scene, with the links between the pages feeling like cuts between shots or scenes. The links that add or change the text work much like a film editor, giving you moments when a shot is added or changed to more explicitly express the subtext of a scene. And since these links are optional, your choice of interacting with them feels like you are helping create the scene.

The great thing about these interactions is that they become as automatic as turning a page in a book. It just happens and becomes part of the flow of reading. You are never overly aware of how much you are interacting with, but you also do not feel like a passive reader who is uncomfortable with the interaction.

Lionkiller is not only a great game, it's also a great reminder of how rarely interactive fiction games are recognized beyond their niche. This is despite the fact that they are often incredibly accessible and only require a web browser. Given the amount of readings an average person does, this is a style of play that should appeal to more people – and deserves more attention than it currently receives.

Lionkiller was created by Sisi Jiang. You can get it on Itch.io (Windows, MacOS, Linux, iOS, and Android) for $ 10. It takes approximately two hours to complete.