ISPs may be asked to publish "broadband nutrition labels" with detailed information on prices, speeds, and data caps, in accordance with laws instituted by US Representative Angie Craig (D-Minn.).

The bill "would require simple information in an easy-to-understand format to give consumers a better understanding of the services they are buying and to protect them from hidden fees and below-average internet performance," Craig said in a press release yesterday. The press release said the bill "would require broadband service sellers to provide the following information to all consumers":

The calculation is simple and barely a page long. It directs the FCC to "promote and encourage the widespread adoption of broadband consumer labels," as described in an April 2016 FCC public announcement from the Obama era. The bill would give the FCC one year to enact these rules.

The language of the bill, which requires the FCC to "encourage and encourage" the adoption of broadband labels, makes it sound like they are optional for ISPs. But Craig said their bill would "require" the disclosures, and the bill text could be updated to make sure it is as intended.

Obama-era broadband labels included monthly fees, data caps and congestion fees, hardware rental fees, activation and installation fees, early termination fees, taxes and government-related fees, "other monthly fees", typical speeds both above – as well as downstream, latency and packet loss. This is what they looked like: 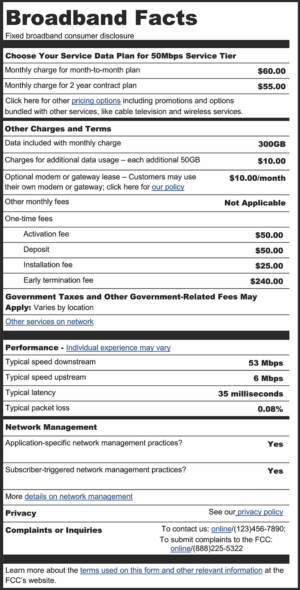 The Obama-era FCC rules made broadband nutrition labels optional, but required ISPs to post the information online if they did not want to use the labels.

"Internet service providers are notorious for keeping customers in the dark," Joshua Stager, associate director of the New America Open Technology Institute, said in a press release yesterday. "Hidden fees, surprise bills, and tight contracts are familiar issues for anyone who has dealt with these companies. Just this week, a report detailed how Comcast hides speed information from customers when they sign up for the service."

Stager was referring to our report on how the Comcast website hides upload speed until customers have completed most of the ordering process and entered a valid credit card number. He also cited his own organization's connectivity cost report, saying it showed that "US ISPs often bury information about service and price under confusing contracts, hidden fees, and complicated billing systems," and a study by Consumer Reports that cable companies added Average customer bill charges (each year) of $ 450. "

The Open Technology Institute has been calling for broadband truth-finding rules for over a decade.

"Congressman Craig's bill removes that confusion by creating a 'broadband nutrition label' that clearly shows the cost and terms of internet plans," Stager said. "This truth-finding legislation is desperately needed as millions of people depend on the internet to work, learn and live during the pandemic. Congress should pass this legislation as soon as possible. People need to know what it is for pay. ""

The FCC could act first – if they get another Democrat

The House of Representatives approved broadband nutrition labeling as part of a major bill last year, but it was not passed in the Senate. Passage would be more likely now as the Democrats control both houses of Congress.

Even if the bill doesn't get passed by Congress this time around, the democratically-run FCC could bring disclosure requirements back. However, the FCC will not make any significant regulatory changes until President Biden nominates another Democrat to break the 2-2 impasse between Democrats and Republicans.

The acting chairman of the FCC, Jessica Rosenworcel, supported the transparency requirements, the rules for net neutrality and the common carrier regulation of the ISP. If Biden makes her permanent chairman, she will likely reintroduce the regulations repealed by Pai once the Democrats have an FCC majority.