Respawn level: The inevitable reincarnation of the company workplace

The future of business

If you'd told an executive at a large corporation in mid-2019 that almost half of the U.S. workforce would be working from home within the next year, they would at least have raised a skeptical eyebrow (and then probably called security to have you removed allow ). But here we are.

Large tech companies, including Microsoft, Facebook, and Google, have closed their physical offices well into 2021. Twitter has told many employees that they can work from home permanently. And now that we've involuntarily been through widespread home work for nearly six months, many other organizations are rethinking the value of office space.

In April, a Gallup poll found that 62 percent of the workforce work from home and 59 percent hope they can do so as much as possible once the pandemic is under control. While the numbers have declined to some extent since then – the Stanford Institute for Economic Research numbers in June showed that only 42 percent of the U.S. workforce worked full-time from home – the fact remains that the relationship of the People's workplace has been dramatically restructured, possibly permanently.

Enlarge /. We worked a long time ago when we all went to the office. There are many very expensive properties that are currently underutilized.

Management seems to be drawing the same conclusions. A survey by Gartner in April found that 74 percent of CFOs plan to at least partially fulfill this request and switch some of their workforce to permanent remote working to save costs. The question is to what extent companies will change their definition of the office to take advantage of the cultural and technical adjustments they have made to keep things moving while the offices are empty.

As long as it takes us to leave the COVID-19 pandemic behind, it seems certain that the role of the "office" will change. You don't have to look far to find utopian stories about the "office of the future" and "work after COVID".

This won't be one of them.

I didn't come as the herald of the shiny new corporate workspace of the future – instead, I'd like to throw a bucket of cold reality on the hype fire. In the past six months, many companies have learned that their businesses can function properly without employees in the office and that balance sheets would look much more attractive if they could get rid of some of those real estate costs. Prepare for the onslaught of multi-year management consulting.

I do not claim any psychic powers. But as someone who has worked in both “hybrid” and full-time work-at-home roles for many, many years, I have a sense of what offices should be in the future – and what many of them inevitably will be.

What is the office for anyway?

For a long time the office was the information factory. It exists as a warehouse for raw materials (office supplies) and finished goods (submitted reports, balance sheets and presentations). It's an assembly line of content, an employee bin where managers can count heads in seats and monitor productivity. It is also the vessel of corporate culture in which employees are marinated for good or bad in the stew of management and mismanagement, team building and destruction, as well as the occasional conference room cluster.

With the increasing digitization of work, the production line aspect of an office space is less and less tied to the physical space. However, until recently, this has not dramatically changed the role of the physical office, especially in industries that are not tech or tech focused. One reason is that the IT infrastructure itself, for most of its history, has mirrored the factory metaphor of work, with work being tightly tied to internal IT resources and access to data dependent on being connected to very specific networks. However, this personal mandate was also partly due to the fact that face-to-face interactions were seen as essential to organizational cohesion and effective management. 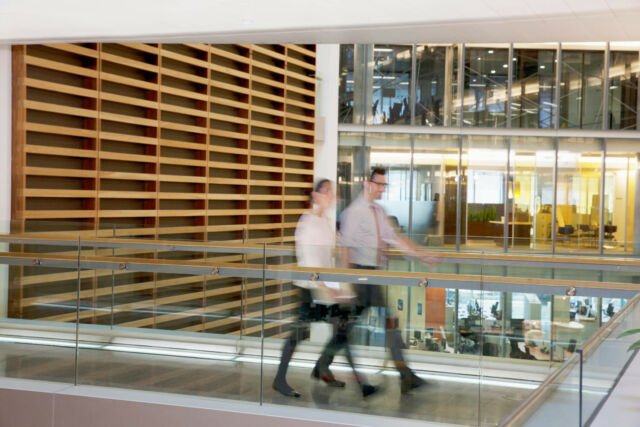 Enlarge /. These two people work so intensively on a project together that they actually seem to be moving in time lapse.

Some organizations – like consulting firms – can function quite well without an office because they traditionally have been out of the office most of the time anyway. For many organizations, however, the office has some things that cannot be fully reproduced in an environment with only a few locations – for example, in the public library where my wife works. She's already returned to work for most of the day, but there have been some obvious changes.

Initially, only small shifts of staff were transferred to the library branches before people were brought in at reduced length for days. Everyone distances themselves socially and wears masks; The break room has an occupancy limit of one. Cupboards that used to store creamer, sugar and other delicacies are now tied with police tapes like a crime scene. Because there is not enough space in the staff work space for social distancing, tasks such as programming, coordinating meetings, planning, and professional development are best performed remotely. Accordingly, everyone now has their working hours at home on their own schedule.

Even when a lot of remote work is possible, certain things are lost without leaving the office. Mentoring, informal personal collaboration, and other intangibles can suffer without a shared physical space. Technical support may also not be sufficient for maximum productivity. And while not commuting supposedly helped balance work and family during the lockdown, many people would be much happier if they could go to the office a few days a week for a better work-life balance – yes even if it's just a matter of hiding from their children for a few hours in a cooperating institution.