The Best Leap, half 5: Saving the crew of Apollo 13

Video recorded by Joshua Ballinger, edited and produced by Jing Niu and David Minick. Click here for the transcript.

When the Apollo 13 astronaut Fred Haise hovered in the tunnel that meandered between the lunar module and the command module, he heard and felt a loud bang. The two vehicles began to warp around him. Then the metal walls of the tunnel crumpled as the spaceship shuddered.

With big eyes, Haise crawled out of the tunnel into the command module next to Jack Swigert and her commander Jim Lovell. From his usual position on Lovell's right, Haise quickly realized that something was wrong with the cryogenic tanks of the spacecraft – the oxygen was simply gone. Fortunately, there didn't seem to have been a chemical explosion, as only a thin wall separated the oxygen tank from the fuel tanks that powered the spacecraft's main engine.

"It really didn't explode like something you think of with fragments," Haise Ars said in an interview. "It is only under pressure and then released some steam. If it had been a splinter-type explosion, I wouldn't be here today. "

The incident occurred on April 13, 1970, towards the end of the second full day of the Apollo 13 flight. The crew on board NASA's third mission on the lunar surface had just completed a live television broadcast. They were tired, but also excited. They should go to bed soon, and when they woke up, the spaceship would enter orbit. Within a day, Lovell and Haise should only be the fifth and sixth person to walk on the surface of another world.

But now, sitting in the Odyssey command module and thinking about losing an oxygen tank, Haise's first thought was no danger for Apollo 13 to return home. Immediately after the accident, death did not seem to be imminent. Rather, Haise lamented the missed opportunity to enter the moon.

"I was just sick with disappointment," Haise recalled. "I knew we had a crash and I lost the landing. That was my main feeling. We thought we had a second tank that was intact."

However, the damage was so great that the second tank was also affected. Oxygen may have escaped slowly, but the leak still started. The spaceship would soon lose both oxygen tanks. This was not so important for oxygen in the command module because the astronauts had enough to breathe. But without the oxygen tanks, the spacecraft could not operate its fuel cells. The Apollo 13 crew would have no power. They were faced with the prospect of freezing to death in space.

When the astronauts and air traffic controllers in Mission Control realized that they could not stop the leak in the second oxygen tank, the mission suddenly changed. Apollo 13 would no longer try to land on the moon. Her mission had become a survival mission.

Even before the Apollo 13 accident, some senior NASA managers had been wondering how long they could get away with the serious risks posed by the moon. Given all the different aspects of a moon flight – from the Saturn V launch vehicle to the command and service modules to the moon modules – a lot of very complex components had to work just right to be successful.

At the start of the program, NASA had formally set the overall success target for each Apollo mission – landing and return – to 90 percent. The safety of the entire crew was estimated at 99.9 percent. However, an assessment of these risks in 1965 showed that the likelihood of mission success based on current plans and technology was only about 73 percent for each flight, while crew safety was 96 percent per mission.

Few people lived with these risks and concerns more every day than Robert Gilruth. His fame may have declined in the past few decades, but Gilruth has outperformed everyone else in America's efforts to send people to the moon and back. After NASA was founded, the young agency had turned to Gilruth to lead the Space Task Group to take a person into space before the Soviet Union. Later, after President John F. Kennedy called for moon landings, the task fell to the Giled-led Manned Spacecraft Center in Houston. 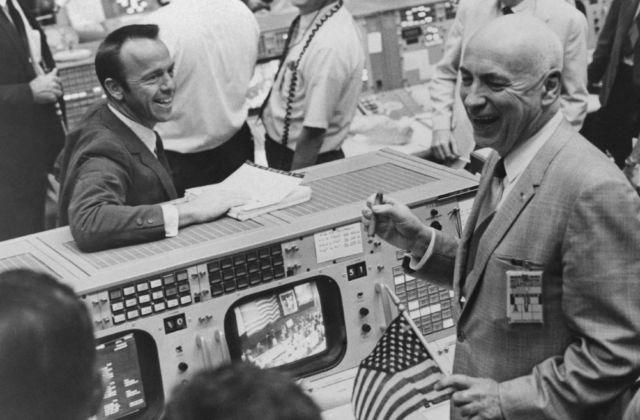 Enlarge /. After successfully completing the Apollo 10 Moon mission, cigars and US flags will be in the Mission Control Center in Houston on May 26th. Among the celebrities are Alan Shepard (left), who was the first US man in space, and Robert Gilruth (right), director of the Space Center.

Gilruth, an aeronautical engineer from a small town in Minnesota, had a more pragmatic view of human space travel than Kennedy's big vision. After NASA successfully launched astronauts with the Mercury program, the next logical step towards a permanent presence in space would have been to build a space station.

"But in the eyes of Mr. Kennedy that did not have the flair that was needed at that time," recalled Gilruth, who died in 2000, in an oral history. "He thought going to the moon was about as good as you could possibly be. I think LBJ liked that too. Nobody in NASA would say he couldn't. At least I said, "I'm not sure we can do it, but I'm not sure we can't."

Gilruth had no illusions about the challenge of reaching the moon. When Neil Armstrong and Buzz Aldrin stepped on the moon in front of a global television audience, NASA had served Kennedy's mandate. If every mission had a quarter chance of not landing on the moon and a not negligible chance of losing a crew, why stay? This feeling only grew in Gilruth as NASA made more moon landings.

"I raised my back and said," We have to stop, "said Gilruth." There are so many chances that we will lose a crew. We only know that if we continue we will do that. "

The place social startups will get funding sooner or later – theinformationsuperhighway