The Misplaced Diaries of Battle

The mayor points to calm. He is about to appeal to the citizens. I notice that he is screaming, but the only words I can hear in the entire proclamation are "Mitstädter" and much later "we are free". Those around him can hear more while we just join the repeated, spontaneous cheers. Finally, we all sing the old Wilhelmus, 7 which moves us all, and when the line “drive out tyranny” sounds, it seems as if a long pent-up feeling of hatred breaks out in people.

In April 1945, the Germans withdrew from parts of the Netherlands as the Allies advanced. This confetti, which was dropped by British military aircraft, was inserted in an anonymous diary.

However, it is real now and as I write this, I try to see what it means. But it's so hard to put it into words. Five years in which we lived under the yoke of a ruthless enemy are not erased in a few minutes. But what I can understand is:

There will be food soon

There will be gas, electricity and water

There will be fuel

Trains and trams are running again

Our men will return from G, where they have been living as forced laborers for years

Our prisoners of war and students will also return

I can walk the street anytime, day or night

The blackout paper can be removed anywhere

Or when someone rings the doorbell late at night

There will be newspapers again

Depending on your taste, the cinemas, dance halls, cafés, concert halls, theaters and music halls are reopened

If torture did not result in death, the families are brought together again

No Westerbork, Amersfoort, Vught 8 should ever be built for anyone other than the G again

After the destruction of Japan, humanity will find the means to ban war once and for all

There will be regular school and work hours again

All of these things go through my head. Not all at the same time, not one by one. Sometimes I become aware of some of them who stay for a moment and then step back until another flashes through my brain. 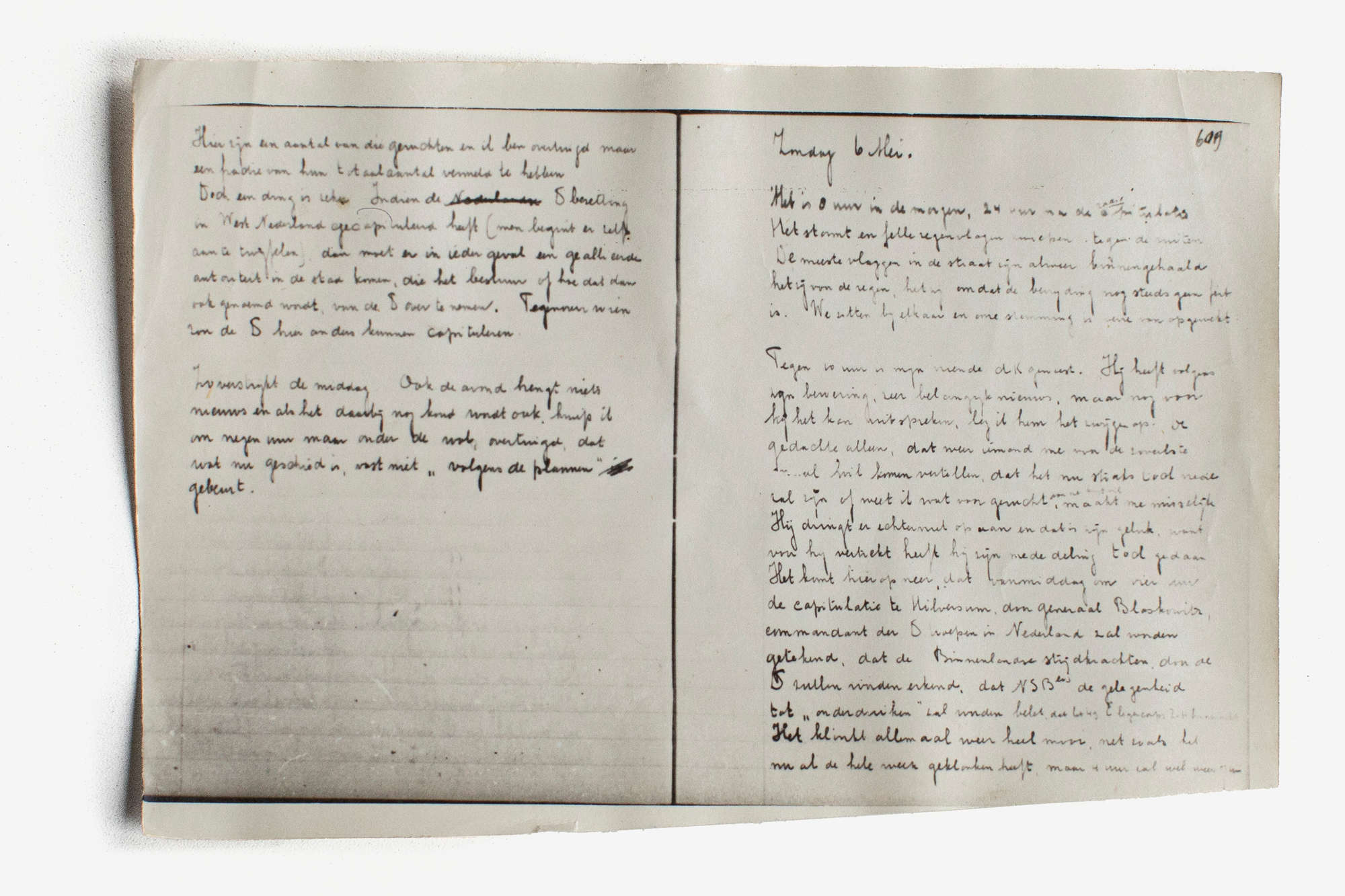 Anton Frans Koenraads describes the liberation of Delft on May 6, 1945 on this page of his diary.

I thought I could end this diary with a sentence like: The first Canadians, still smeared with the smoke of battle, turn the corner of our street. But things turned out differently. We are still happily waiting for their arrival.

I expected the end to bring relief, like taking off a lead suit. It was different again. I find it difficult to get used to the idea that we are really free now. Every time I think of how many things that used to scare me have now disappeared, my heart is touched with happiness.

This is the end of this diary. In it I tried to convey what I was concerned with in the last months of the war. It is by no means objective. Objectivity is a question of time, history and [your own] point of view. 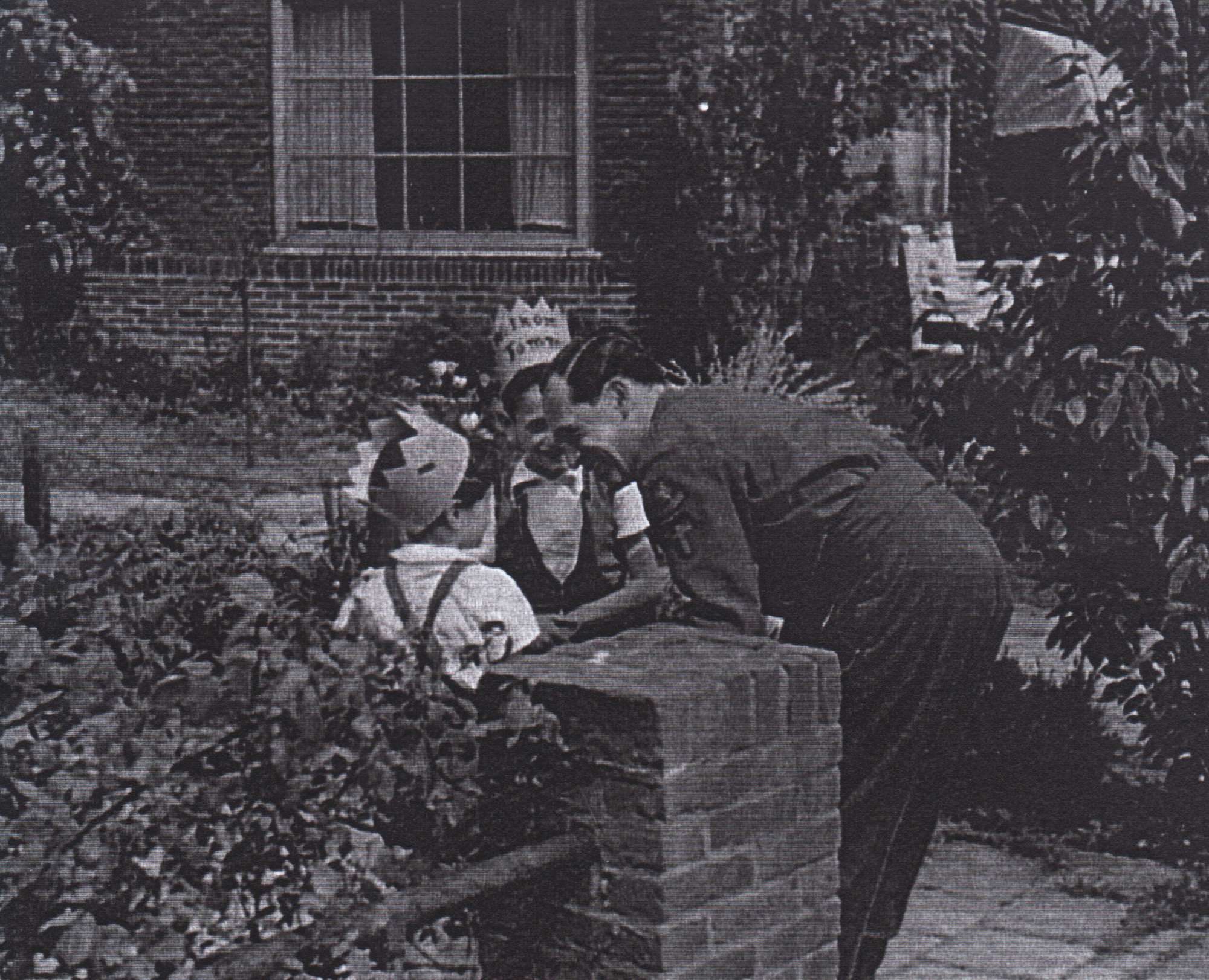 Two young Jewish children, Rene and Lucy, who were hidden by a Dutch family, are reunited with their father Herman Speyer on May 7, 1945 after the liberation.

Later history books could be objective, mind you. But this diary can be impossible. It was written when events happened, sometimes without knowing the causes of the facts I described or their place in the big picture. Some of the facts may have been wrongly motivated, but they really happened. Sometimes I am afraid that I will not be believed because later generations simply do not want to accept what is described on these pages, but I swear in everything that is important to me that none of the events are wrong. Everything that was written down was "fresh from the press", I would say.

I had the painful privilege of experiencing a "major war". That is now behind us. Let us strive for "complete peace" with all the power that is in us.

7 – The Dutch national anthem 8th – concentration camps in the Netherlands 9 – From May 13, 1943, it was illegal to have a radio to prevent people from listening to prohibited channels