The Nasdaq is once more on the precipice of correction territory. Have buyers misplaced religion in Huge Tech?

This is the web version of the Bull Sheet, Fortune's daily No-BS newsletter in the markets. Sign up here to get it in your inbox.

Have a nice Friday everyone. We are trying to end a volatile week on an uptrend as US futures are pointing to decent gains. But it is a mixed picture everywhere. Brexit uncertainty is holding back European stocks and global stocks are on the right track for the second straight week.

35%. The consumer is the engine of the US economy, roughly responsible for it 70% of GDP. Goldman Sachs economists are therefore pleased to see that consumer spending picked up in July and August, suggesting that the economic recovery is firmer than previously thought. The rapid recovery in consumer spending is one of the main reasons Goldman is now forecasting a 35% jump in GDP in the third quarter.

-9.4%. The Nasdaq is about half a percent away from returning to the correction area. Since the record close on September 2, the tech-laden index has fallen 9.4% as investors rethink the high valuations of big tech stocks. Apple is down 15.3% high since its September 1st. Tesla is doing worse and crashing 25% from its split-adjusted all-time high reached on August 30th. That is firmly in bear territory. Unfortunately, as we know, trading has been incredibly volatile lately, despite the fact that Nasdaq futures are pointing to a rebound as I write. 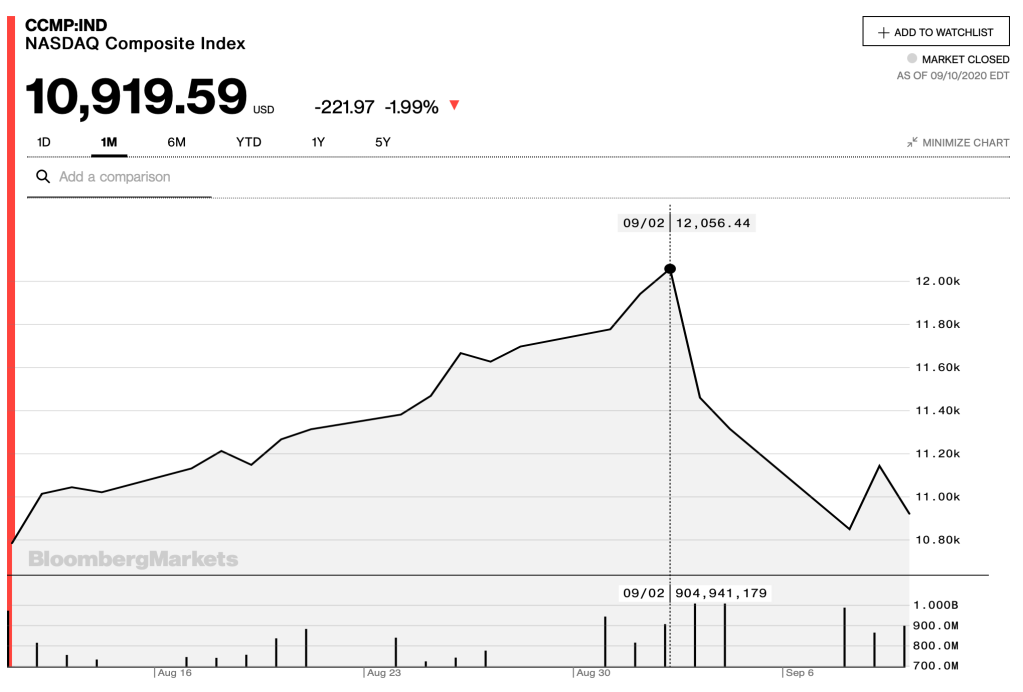 4.9%. Quiz Time: Which of these four major exchanges got the best results last month?

The answer is D. D. Since the second half of August, investors have increasingly turned to European stocks, with the Dax being one of the clear winners. It is plus 4.9% in the last 30 days. The Dow and Nasdaq were in the red over the same period.

Have a nice Weekend. I'll see you here on Monday.

Disrupt 2020 kicks off tomorrow — are you prepared? – theinformationsuperhighway