My husband and I have been flying with our twin sons since they were infants. I breastfed her with a couple of middle-aged men on their way to a golf vacation. They slept in our arms, on our rounds and against our chests, in the La-Z-Boy style when we were walking through the country. Regardless of the position, I'm not sure if either of us has ever felt really comfortable – especially these two golfers.

For our last trip – a flight from our home in Denver to DC for my cousin's wedding – we tested the JetKids from Stokkes BedBox, a kid-sized wheeled hand luggage that turns an economy class seat into a makeshift bed. Although my boys – now three and a half – were too long to lie down comfortably to sleep on their extended seat, the extension gave him extra leg room as he put his head in my lap. There was also an unexpected bonus: with their “beds”, our children were less likely to lose their toys in the black abyss of the airplane carpet and, more importantly, less likely to play on the same germy ground. On our return flight, I couldn't set up the beds quickly enough for the boys after the start. I also realized that if we chose Economy Plus, the increased pitch would have given the boys the little extra space they would need to curl themselves up. Even though they had put on most of the way home, they didn't want me to put the BedBox away. They were too happy for the extra scope.

I only wish we had these when the boys were younger because I imagine that every child under the age of two would immediately fall asleep on one. Online reviews have said so, and the Stokke website has collected lots of real pictures of cute children, big and small, who are either stretched out or curled up, sleeping, or relaxing comfortably in their personal lounge chairs. But what most people seem to love about the BedBox is how much fun their kids have while driving.

That was definitely the case with our twins. They tend to whine when we go somewhere, which doesn't lead to a playground, but after spreading their bags in the airport parking lot, the only sounds they made were screams of joy when my husband and I each got one Train belts snapped and led them to our terminal on a half kilometer walk. We got an endless smile from strangers and brand inquiries from parents and flight attendants. And we got a happy silence from the boys, even when we were checking in, in bagel lines or on moving sidewalks. The wheels are fast and smooth (and have their own suspension!), Which makes pulling easier. The only real problem is the lack of brakes. The BedBoxes tend to accelerate ramps at a rate that boys loved much more than their parents. 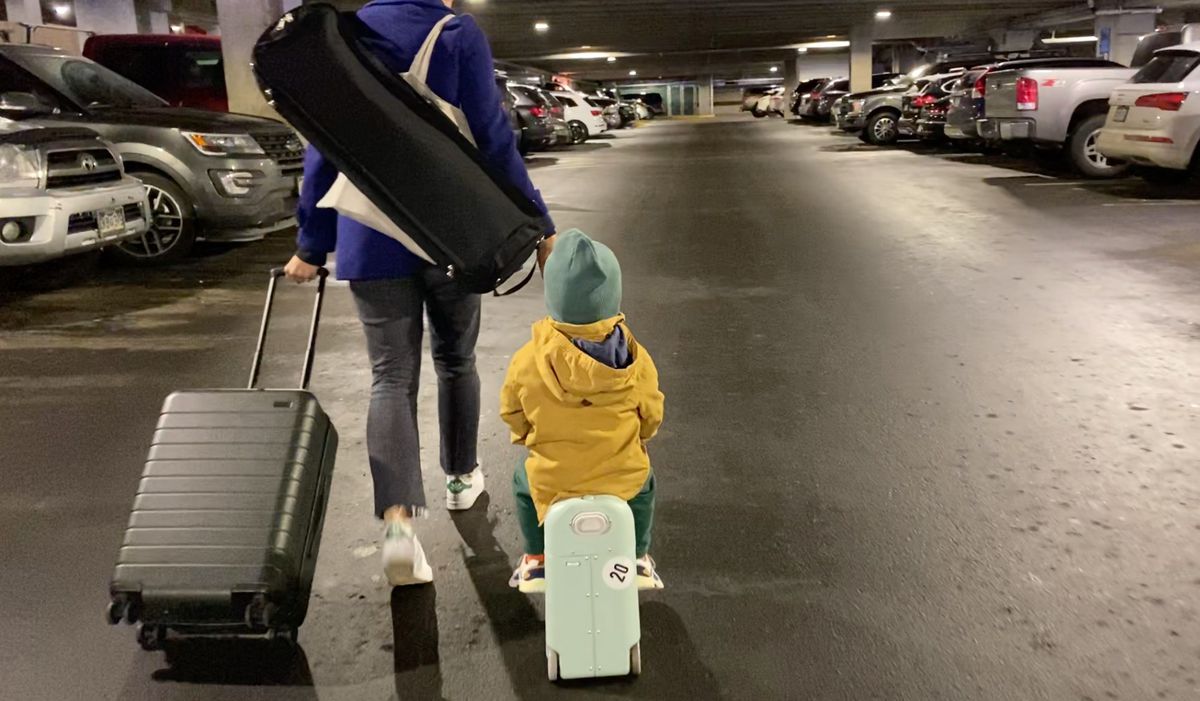 They had more fun riding than sleeping. Photo: Rachel Sturtz

My only complaint is durability. To turn the case into a bed, remove the lid, turn it over and put it back on the case with the open end up. It looks like a cute little bulldozer with its shovel pulled up. The top has two slidable plastic plates – one to extend the seat and hold the mattress, the other to cover a small storage space for toys and snacks. But the first time I tried to set them up – test runs at home before I went to the airport – one of the plastic plates rattled on the floor when I tipped over them. When I tried to replace it, I broke the ends of the tiny, thin rails they were supposed to hold in place. The bed was still working, but picking up those panels was an extra step that I would have liked to have avoided.