They have been incarcerated firefighters, now they need to change how California fights fires

The pandemic isn't the real reason the California Fire Department is so thinly spread this year, some former firefighters and supporters told The Verge. Formerly incarcerated firefighters who want to continue working have been excluded from careers in firefighting due to their criminal record. Some people released from prison may qualify for seasonal forest fire fighting jobs, but that is often low-paying temporary work. Bills to remove barriers to people's careers after incarceration are yet to be passed.

Detained firefighters made headlines this month as they battle some of the state's biggest infernos and return to prisons where the novel coronavirus has spiraled out of control. More than 1,300 jailed firefighters have been on the front lines recently. There would have been hundreds more if the state hadn't decided to release thousands of people early in prisons to stop the spread of COVID-19.

The Verge spoke to two people detained as urban firefighters in California. Amika Mota was a senior engineer at the Central California Women & # 39; s Facility Fire Station in Chowchilla from 2012 to 2015, where she was convicted of manslaughter. Rasheed Lockheart was a senior engineer for two years while sentenced to prison for armed robbery in San Quentin State Prison. He left prison in January just before it became the site of one of the largest COVID-19 outbreaks in the United States.

Rasheed Lockheart worked as a municipal firefighter for two years while serving his sentence in San Quentin State Prison.

Mota says she made 37 cents an hour as a firefighter; Her monthly paycheck – which was $ 56 – wasn't even enough to cover the cost of running shoes she needed to keep in shape for the job. Lockheart made 53 cents an hour – at that rate, he had to work 13 hours to save enough to buy a six-pack of soup, he says. In comparison, firefighters in the Bay Area outside of prison make an average of $ 47.44 an hour. However, for Mota and Lockheart, becoming firefighters outside of prison was off the table because their beliefs prevented them from obtaining EMT certification, which is required for most city and county fire departments. Now both of them work for charities in the Bay Area that work for incarcerated people, Mota as the political director at Young Women & # 39; s Freedom Center and Lockheart as a grassroots fundraiser for Planting Justice.

This interview has been edited for length and clarity.

How was your experience as a firefighter?

Mota: When I went to the fire department it seemed like one of the best things I could do in prison. It was a way to get away from the prison drama. It was a way to do something that would give me new skills. I imagined getting in shape and getting mentally fit too. And then at that point it felt like a great honor to serve in the church.

I just had no idea what the work actually looked like. I just couldn't even wrap my head around it. When I got out of there, I really didn't realize that we would react to serious car accidents on the freeway. My first car accident was a triple death and we were responsible for towing bodies. It was one of the worst. Even the really seasoned firefighters who responded to the call with us – I remember one of the OGs vomiting on the side of the road. It was so bad that they were shaken to the bone.

After that, I remember talking to my dad because he was an emergency room nurse and I knew he would understand what that type of trauma was like. He was probably the best person I could have talked to because he said, "Look, I know firefighters see the worst."

Unfortunately, most of our calls either transported corpses from residential units to the hospital or performed CPR. The hardest part was doing CPR on people I may have known for years. I recognized many faces. It's an aging, dying population from overcrowding and mass incarceration. We had 20 deaths in 2017 and I did CPR on almost every one of them.

What goes through your head when you hear headlines about firefighters from inmates fighting flames this year in the middle of a pandemic?

Lockheart: The first thing that comes to mind is that they are overworked. You are overloaded. My detained firefighters now have to carry more of the load.

You get a lot of "man downs" that are essentially just someone who needs to be taken to hospital for care. These cell blocks are like five levels high with very narrow walkways. When someone is unable to get out of bed or function properly due to a medical emergency, they call the city's firefighters.

I feel a great survivor's guilt. There is nothing I can do now for the same people I was responsible for helping and saving. The same people I walked the courtyards with – they were great people who deserved their opportunity to be out here, to lead their best lives and to give back for who I am – can't and they are to live in fear. 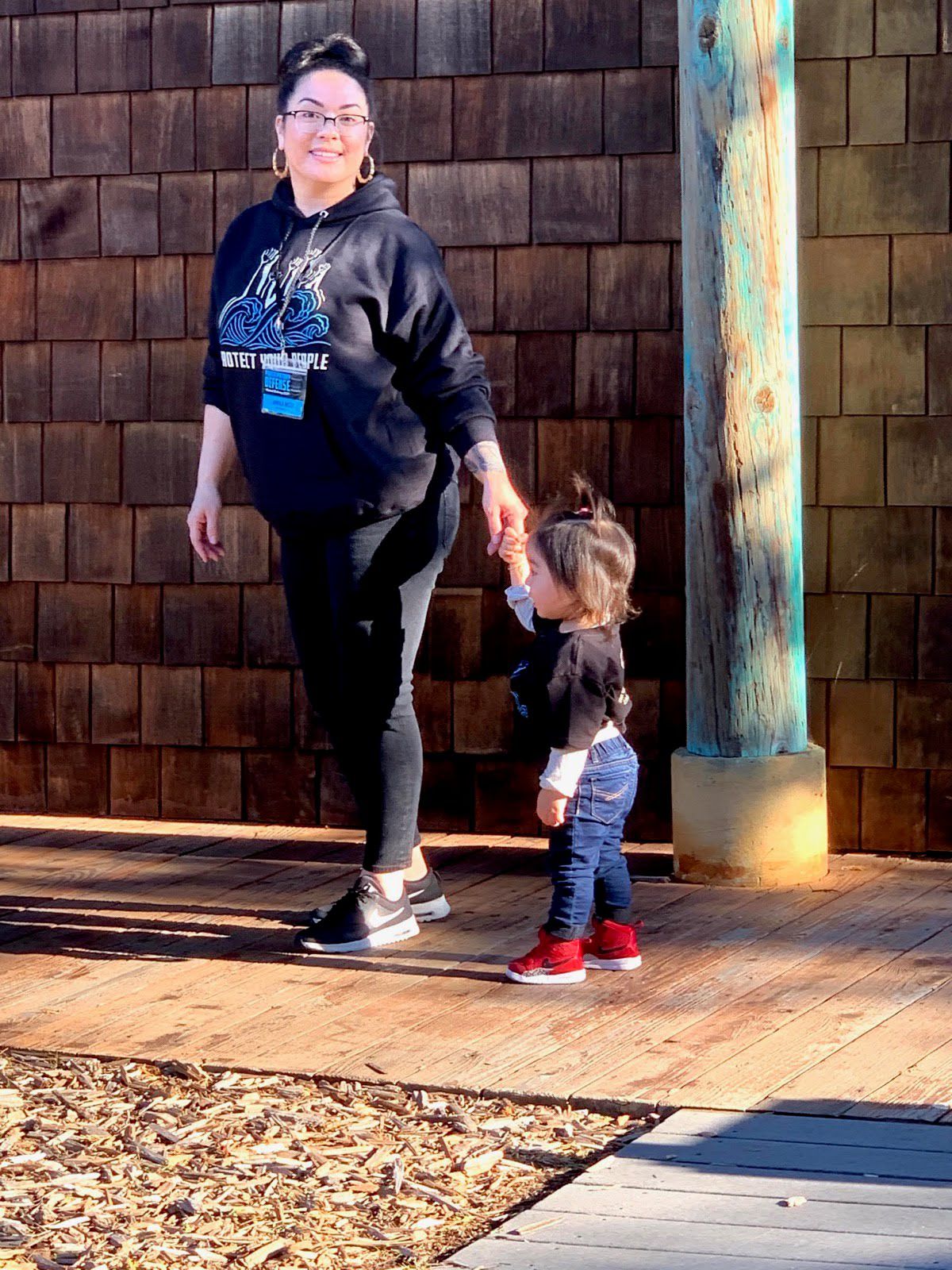 Amika Mota and her daughter.

Mota: Articles appear saying that COVID-19 wiped out our firefighters or that previous publications wiped out our ability to see firefighters. This narrative is so frustrating for me because we're not talking about publishing in terms of what it means for freedom to be a priority. We speak of freedom in exchange for what the state loses when we gain freedom. And the fact that we were all vetted so thoroughly by the California Department of Corrections and Rehabilitation that we made it to a fire department or fire camp first means they have carefully investigated our crime, prison behavior, and interactions with us have staff and law enforcement officers, and they found us safe enough to be in the community. But aren't we safe enough to be at home with our families? This is so crazy. It's like we're low enough to fight fires and save the state $ 100 million a year, but they are literally saying that we are not worthy enough to be free.

What must change for the incarcerated firefighters in California?

Mota: My analysis of the program has changed a lot from my time to my five-year home. I've started looking deeper and I have to say I'm pretty appalled that I think California is so incredibly dependent on a prison population to keep the state budget up to date.

The entire fire-fighting population is so low-risk that they should be at home. Every single one of them. We need to find an entirely different structure to lure people into actual paid employment opportunities rather than slave labor pulling black and brown bodies from a prison population to fill our budget gap. I'm sorry to start with this, but I feel like we keep being missed.

Lockheart: I am not in favor of getting rid of the fire camps or the fire stations, I am not doing that at all. I want equal pay for the firefighters who risk their lives just like everyone else because it essentially tells us that our lives are not worth as much as yours. There are jobs in these prisons that pay a minimum wage. Why shouldn't these people risking their lives out there get the same?

"There is absolutely discrimination"

When we take to the streets after leaving prison, we want the opportunity to continue the profession we have just learned. We should be able to go straight to a fire brigade, just like firefighters do when they come from academia.

Mota: There is absolute discrimination in hiring former prisoners. (There are also race and gender differences: professional firefighters in the US are still 95 percent male and 82 percent white.) The story behind it is that it is a matter of trust and a flaw in character. Every time I hear this I want to say, “But we have answered in people's homes. We performed CPR on people and brought people back from overdoses. We responded to families of law enforcement officers who were in a car accident on Highway 99 on their way to work. We were those trustworthy firefighters who you say we are not worth being. "

What I was told by the bosses and captains I worked with was that I could potentially work for the state as a seasonal firefighter in the wilderness. But for that I would have to leave my children, whom I had just been away from for seven years, and the pay wasn't great. Working for a municipal fire department in the Bay Area just wasn't on the radar because I knew we needed an EMT license, which as a criminal in California I can't have. I wanted to keep fighting the fire, but I didn't think about it at all.