After a mission at the start of the Final Fantasy VII remake, Cloud Strife and his team decide to return home using a strange mode of transportation: they jump off a scaffold and a parachute into the slums below.

It's more dangerous than the train, but it has a damn good view. I've spent countless hours in the gritty metropolis of Midgar since the launch of Final Fantasy VII in 1997, but I've never seen anything like it. As he floated through the smoggy sky and stared at the vastness of humanity, he really drove home how much has changed in the past 23 years. This is the midgar that I've met. But it's also so much more.

Final Fantasy VII has always been a tricky game. It is sometimes both the most popular and the most controversial game in the long-running series. When it was released on the original PlayStation, it changed the series forever with elaborate CG cutscenes and a focus on larger, larger stories. It was strange and emotional and fascinating in a way that only a few blockbuster games had existed before or since. Trying to harvest that energy, which is inherently related to the late 90s and the beginnings of 3D gaming, seemed a particularly difficult task.

However, this makes the remake all the more impressive. It translates the experience into something modern without losing much of that classic charm. It's not the whole experience – FFVIIR only includes the first Midgar section of history, which makes up about a third of the entire game, with no indication of how the rest will be released – and it's certainly not perfect. There are some new aspects that feel unnecessary, moments that serve as fillers, and areas where the game can be frustratingly out of date. It's messy and beautiful, exciting and confusing – that is, the remake is 100 percent Final Fantasy VII.

As with the original, FFVIIR focuses on a mercenary and genetically enhanced super soldier named Cloud Strife. At the start of the game, Cloud was hired by Avalanche, an environmental group that tries to blow up a reactor that it believes will harm the planet. First of all, the conflict is clear: there is a stereotypically evil mega corporation called Shinra that sucks energy called Mako from the earth to power the huge city of Midgar, and Avalanche is a ragtag group trying to put an end to it . (Shinra is kind of a company where the president says things like "progress requires sacrifice") but it gets a lot more complex in classic Japanese RPG fashion. There are ancient magical races, a life force that holds the planet together, and an overpowering being called Sephiroth who wants to destroy the world.

The story is incredibly confusing and confusing, but the remake actually does a great job of explaining a lot of it. Part of this has to do with the narrower focus. Since the experience focuses specifically on Midgar, a gritty metropolis that only exists due to Shinra's exploitation of the planet, it is easy to grasp the operations. The game only begins to incorporate the more complex elements towards the end. FFVIIR also extends aspects of the original to further refine the world. For example, in the first game, Avalanche was a tiny group that came from the basement of a bar. Here you will learn that it is actually just a cell in a much larger organization. More importantly, characters that used to be just names with little personality have now become fully elaborated people. Avalanche member Jessie in particular has grown from someone I hardly remember to one of the most famous characters in history.

Overall, the story makes a lot more sense. Even for long-time fans, the additional depth means that the big moments have more impact. I already knew a lot about what would happen in the game – the main story beats remain the same, and in some cases the scenes are almost identical to the original – but they can take on new meaning and emotion here. If you lose characters, you will have more effects and you will even see the consequences of your actions after attacking Shinra.

It is crucial that FFVIIR does this without taking itself too seriously. Sure, cloud is as depressed as ever and the world is dark and oppressive. But it gets pretty weird too. One of the most controversial scenes from FFVII is cross-dressing clouds to sneak into a less reputable company. It's not a scene that has aged particularly well, but the remake makes it something campy and fun, complete with a rhythmic dance sequence that maintains the original's penchant for strange genre-mashing mini-games. 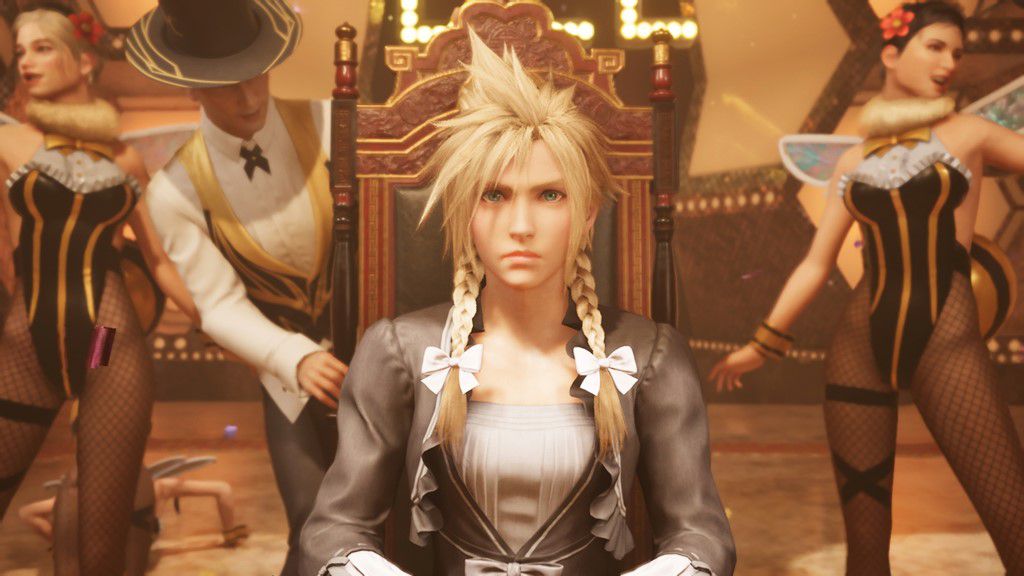 One of the aspects of the game that benefits most from this modernization is the environment. Midgar was always meant to be a sprawling cityscape, but it was clear that the developer's vision for the original PlayStation hardware was too big. Here, however, it becomes a dynamic and credible place. Every district known only by its numbered name and reminiscent of other dystopian cyberpunk metropolises now feels different and inhabited. It is a city with a unique layout: eight different plates extend from a central column, each driven by a different reactor. Shinra employees and the rich live on the plates while everyone else is stuck in the slums below.

You can feel this tension wherever you are. No matter where you look, you can't get away from the towering panels above you. It is a constant reminder of the class division of the world. In the meantime, you actually have the opportunity to venture into the Shinra staff's accommodation to get a feel for how the other half lives. Elsewhere, the shabby Wall Market is a booming, vibrant place, while Aerith's house is the quiet haven it was always meant for. I particularly loved sneaking around the oppressive yet functional Shinra headquarters with its shiny glass walls and definitely not bad lighting. Really, it's almost like the original game was a sketch of the world. Here it was completely worked out and colored.

The remake is more than just a visual and narrative revision. Square Enix developers have also modernized much of the gameplay. The most obvious example is the fight. The 1997 version of the game was a classic turn-based role-playing game in which you and your enemies alternately attack, heal and cast spells. The remake is much more action-oriented. Battles take place in real time and basically FFVIIR is a bit of a racket. But depth is hidden there. You can use basic attacks whenever you want, but any other action – using items, casting spells, performing special attacks – is done through a timer. In most battles, you can just fight your way through enemies. But in the tougher fights, finding a way to heal or save a fatal blow for the right moment becomes a crucial strategy.

Overall, the fight just feels good. It's fast, exciting, and complex enough that standard battles don't get boring. It's especially great during some of the big, multi-part boss fights that usually require an extra level of strategy. Even better, you can only control one character at a time, but you can switch between group members at will. I have spent most of the game using Cloud in battles – his incredibly large sword is a lot of fun – but I would switch to other characters when it came to using their special abilities. It's a fairly open system that you can play with as you like, and it's supported by more robust character customization options. As in the original, you can get new spells and special abilities by putting glowing orbs, called materia, in your weapons and armor. Now there is also a simplified skill tree that you can use to further improve your skills. It's not very deep or complex, but it definitely makes the RPG element more enticing. 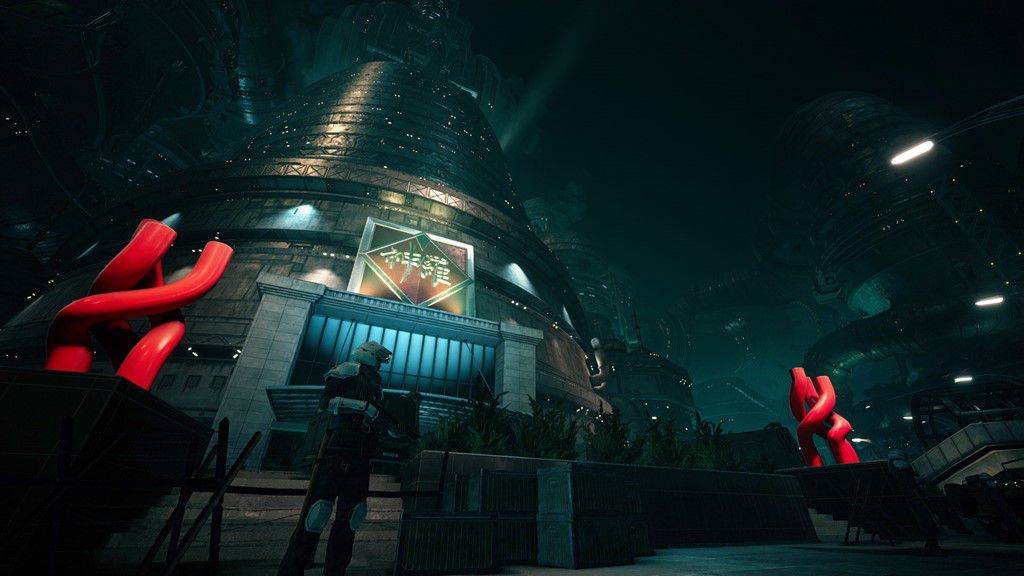 For the most part, the changes to the game are for the better. FFVIIR looks incredible, has satisfying action and a more understandable story. But there are some elements that feel out of date – and some of them are new additions. For example, there are side quests now. It makes a narrative sense: since Cloud is a mercenary, it seems likely that he would take jobs in the Midgar slums for extra money. Unfortunately, almost every one of these missions is a burden. Some have fun story elements, but ultimately everyone is all about going somewhere to collect an item, killing some monsters, or both. This is not much supported by the fact that FFVIIR is an extremely linear game. Doing a side quest doesn't mean exploring a huge world. Instead, it forces you into another beautifully dressed hallway. And while the remake works out some of the bit players from the original, brand new characters are also introduced that remain frustratingly undeveloped throughout the story.

Boss fights can also be annoying. While many are smart and exciting, there are some that create the worst aspect of JRPGs, with enemies reinforced by massive health bars that take ages to eradicate. On two occasions, I turned to the game's "classic" difficulty level, which almost automatically plays itself with auto-attacking characters, rather than repeatedly dealing with the dying of a boring boss. It's great that this accessibility option is there, but it would be better if these bosses weren't so annoying.

Even for long-time fans, it is worth exploring them again

Perhaps the most remarkable thing about FFVIIR is that it makes a game I've played several times in the past 23 years something interesting and new. While the core moments remain untouched, there are new additions and optimizations that are worth researching even for long-time fans. There is even a new storyline about fate that raises even more questions. It is not clear when we will get the next episode – the game ends with the ominous line "The unknown journey continues" – but the remake ends in a way that is surprisingly satisfying considering that it is not a complete one Story told. It largely completes the initial Shinra story and from then on uses Sephiroth as the true great evil.

There is a moment that many players experienced early in the original game, including me. Up until that point, the entire story had been contained in Midgar; Then you suddenly leave the city and realize how big the world really is. It is almost shocking. So far FFVIIR has successfully captured that initial feeling – now I want to see the rest of the world.

Final Fantasy VII Remake will be released on April 10th on PS4.