I was only in Dead Cell's new The Bad Seed expansion for a few minutes before I knew I was thrilled again.

The expansion, the first paid update for the $ 4.99 indie roguelike, adds some new areas that leave the main path of the game's linear set of procedurally generated levels. It's the second add-on, but it's the first from Evil Empire, a spin-off from the original game developer Motion Twin, which was founded last year and is now free to steer the game in the direction you want. I wanted to see the results of this choice and know if Evil Empire could capture the magic (and misery) of plunging into the Dead Cells interactive meat grinder.

The good news is that the spirit of the game is indeed intact, although surprisingly there is a little more magic than misery. The theme of the Bad Seeds is plant and insect-based horrors. The new "Dilapidated Arboretum" and "Swamp" biomes offer all kinds of repulsive creatures, mushrooms and ticks that can best be combined with a range of new weapons.

This includes the very first two-handed weapon for dead cells, a giant organic scythe obtained by defeating a powerful new enemy. The new biomes are also the most complex of the game's various levels. There are new, atmospheric background tunes and a more complex level design that makes exploring both areas a fun puzzle if you don't avoid little murderous mushroom men and minions who carry weapons.

As an expansion to one of the toughest games in recent years, the Bad Seed is also surprisingly accessible. The new biomes are easy to reach from the introductory area and their difficulty falls neatly in the first third of the game rather than the second half, where they are expected to be more powerful and versatile. This is probably due to the fact that it is a paid extension. Dead Cells' first DLC, Rise of the Giant, was free, but only for the hardcore crowd. It introduced two new bosses, but it also added secret endings to the game that can only be achieved when played on the highest and most inaccessible difficulty.

That may be the reason why The Bad Seed pulled me in so hard. After managing the giant's rise at the end of last year in an act of self-flagellation, I wanted to give up Dead Cells for good. I even archived the game on my Nintendo Switch and was convinced that I would never touch it again. I was so dependent on the brutal loop of the game that I tried to die and try again: I had to take extreme precautions to force myself to stop.

Dead Cells is one of those games that will ruin your life when it comes up against the right combination of stubbornness, self-deception and neurotic obsessiveness. I don't mean that it will actually destroy you because it won't send you into an inevitable downward spiral that will make your mental health fade away. But it comes close.

In your free time, you can practice Biomes and read everything you know about optimal builds and strategies. Sometimes, after a bad move or just a bit of bad luck, you stare blankly or wonder why you're playing this game and what arcane, dark spell has been cast over you. I have the number of times I've just googled "Dead Cells too hard reddit" to read other people's comments that may sympathize with my pain. Maybe there is a dead cell support group out there. Maybe I should start one.

The fact is that Dead Cells is both a fantastically designed and a criminally difficult video game. It's not just difficult in the way of Dark Souls or the old way of arcade games. The fact is that the game invites you to play it under increasingly masochistic conditions, eventually reaching completely different constraints that only the most committed players will ever try.

For example, you can literally play the game for hours on end to lose all progress in a wrong move within a second or two. Or, you can flawlessly play through to the end to perform slightly better (and still perish) against a boss you've killed countless times against.

That is of course the whole point of this unique Roguelike. There is no upgrade in Dead Cells. You only play until you are good enough to beat the entire game in one session. The only variables that change are the drop rates of stronger weapons and items. To increase the chances of getting better equipment, you must keep beating the game (or a significant part of it) and save the "cells" that fall from dead opponents.

It's a cycle you have to master if you want to try the later "Boss Cell" versions of the game, where the increasingly punishing restrictions result in total absurdity, e.g.

It doesn't have to be played at all. Dead Cells is a perfect, well-designed game that you can spend 20-30 hours on and then take off. But those who sink deep into Dead Cells, like yours, have to face the game's various challenges, even if they start to look unfair.

This has made Rise of the Giant an addictive yet painful experience. It invited you to be the absolute best, and it even has rare, immensely important story threads dangling behind this secret final level, an accomplishment that forced me to spend dozens of hours just to get there. It would take me many hours longer to actually finish it. 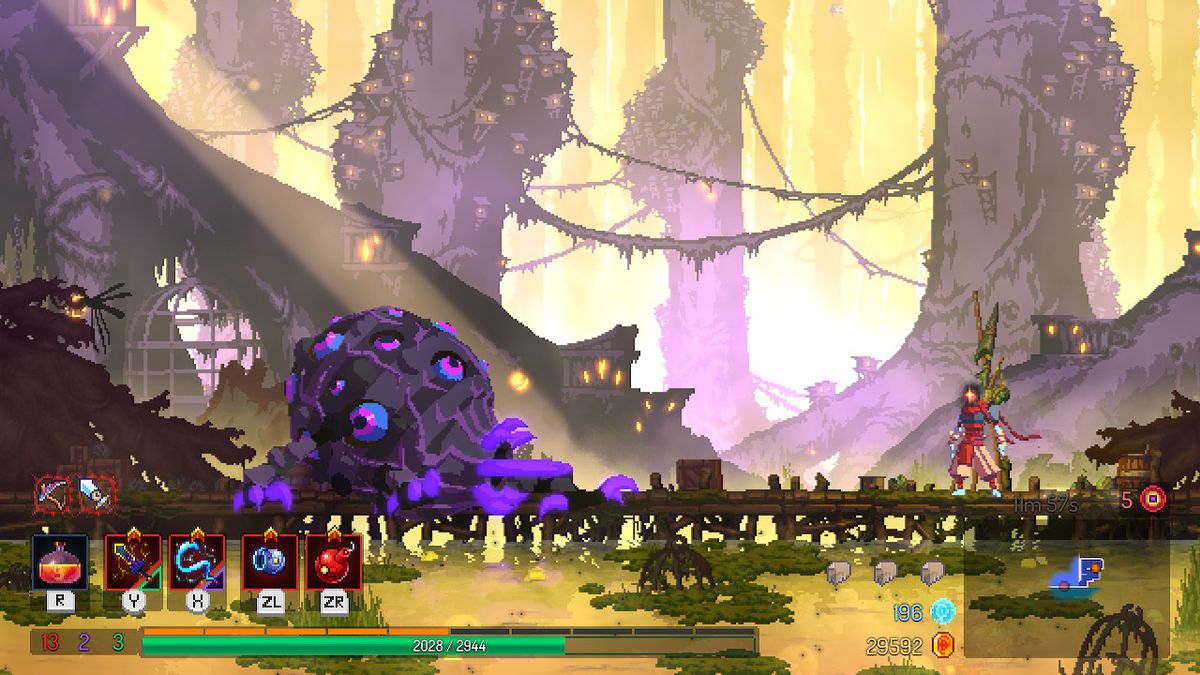 That brings us back to the Bad Seed. When I fired it on my Nintendo Switch last Friday, I was ready to die. Many times. And yet I didn't. I did it on standard difficulty, mostly because I increased the drop rate for good items.

Then I did it again at level three of the boss cells, collected more cells and bought some of the interesting new items. It felt like the game was supposed to be fun, and I'm glad that so many Dead Cells players who haven't (and never will) ventured into the boss cell area will enjoy it and at such a low price.

But there is an excruciating part of me who wants to go deeper again, although I know that I have to suffer for it. On Saturday morning I started a brand new run, this time in custom mode, so I could only use the scythe and some free traps. But I put it on boss cell five. I am convinced that there could be a secret at the highest level of difficulty, maybe just a rare item or a new outfit that needs to be unlocked.

Still, I want to know that I can overcome The Bad Seed's biomes in their most oppressive form and finish playing through, even if I have to try to throw myself against the wall. And I've already died several times. I haven't even made it past the new boss. I'm grinding again and Dead Cells has sunk his teeth again and won't let go.